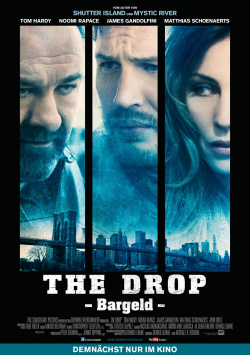 Spread throughout Brooklyn, several bars serve as money drops for organized crime. Without much notice, large sums of money are parked in one such bar on an evening by the mob bosses, to be picked up at the end of the night. Bob Saginowski (Tom Hardy) works in one of these bars, which was once owned by his cousin Marv (James Gandolfini). Now Marv just runs the place for the mob and has lost any shred of joy in his former passion. Things get really messy, however, when the bar is robbed one day. Not only does the owner of the bar demand the stolen money back from Marv. Now the police is also interested in the shop. In this situation it doesn't suit Bob at all that he suddenly has to take care of a new roommate. But when he finds a badly battered puppy in a garbage can on his way home one night, the loner can't bring himself to abandon the dog to its fate. With the help of the secretive Nadia (Noomi Rapace), in front of whose house he found the dog, Bob wants to take care of the little creature. And it doesn't take long for the two to become close in the process. But this calls Nadia's violent ex Eric (Matthias Schoenaerts) into action. The times when Bob could lead a quiet, inconspicuous life in the shadows of society, are now finally over.

The Drop - Cash, the US debut of director Micha&euml;l R. Roskam, gives the impression in the first few minutes of being a mixture of classic gangster thriller and character-oriented milieu study. But then the plot, based on a short story by Dennis Lehane (Mystic River, Gone Baby Gone), takes a slightly different turn with the discovery of the little Pit Bull puppy. The thriller becomes more and more a character study of a quiet loner, an unusual romance, and a quiet social drama that builds to a surprising climax in a depressing atmosphere.

It is this mix, enriched with a dash of very quiet humor, that makes the film absolutely engaging despite its enormous slowness. Roskam gives especially lead actor Tom Hardy enough space to fully develop his talent here. At first it seems as if Bob is a rather one-dimensional, clearly drawn character. But Hardy makes it clear, first in a very subtle way, but in the end in a surprisingly drastic way, that this is not the case. Thus, he is also representative of the great strength of the film, which increasingly questions its initially clearly defined roles and increasingly blurs the lines between good and evil, between right and wrong.

This is then also the primary reason why the story is extremely exciting until the end, despite the very worn narrative. Sure, thriller fans who need pace, action and lots of blood for good entertainment will certainly have to fight extreme boredom quickly here. But those who appreciate adult, character-oriented genre cinema will get their money's worth here. Because atmospherically as well as - thanks to the much too early deceased James Gandolfini - this gangster drama clearly plays in the first league. And for that there is a very clear: Worth seeing!