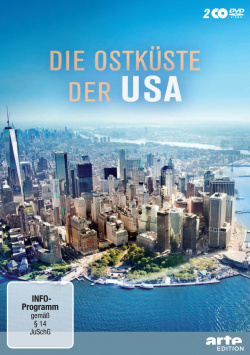 The East Coast of the USA - DVD

Content: It is easy to succumb to the temptation to see the USA only as a whole, without being aware of the enormous versatility of nature, urban architecture, culture and mentality. But just one look along the East Coast is enough to realize how many different facets the United States has to offer. This is now made impressively clear by the very nice documentary series The East Coast of the USA. In a total of five episodes, it takes the viewer on a journey from Florida to the southern states and New York to New England, New Hampshire and Maine. In the process, impressive aerial shots and fascinating landscape images alternate with interesting portraits of quite normal inhabitants of these regions.

So the viewer flies over legendary Miami Beach with its famous Ocean Drive, past the Cape Canaveral spaceport over sprawling citrus orchards, gets a bird's eye view of the distinctive water tanks on the rooftops of New York, dives for oysters off Long Island, pays a quick visit to elite Yale University, or enjoys luxury in the Hamptons. During this trip, you'll meet a leg-amputee kite surfer, an avid muscle car enthusiast from Daytona, a Georgia farm owner, and a Coney Island photographer; look over the shoulder of a realtor in the Hamptons; watch a basket weaver in Nantucket make traditional crafts; or marvel at vegetable gardening on the rooftops of Boston.

The creators of the series have done a great job of not only capturing the diversity of the landscape along the East Coast, but also showing how different the mentality of the people in each region can be. On the Florida Keys, for example, there is an extremely relaxed attitude towards life that is still influenced by the former hippie culture, while in the area around Newport, sophisticated luxury with a European touch is cultivated. In a small town on the coast, a singing chef leads a fairly laid-back existence, while a bike messenger in New York can barely catch a break. These are very interesting and extremely different characters that are presented here - and that is exactly what makes not only the entire East Coast, but precisely this five-part series so exciting.

The East Coast of the USA, however, lives primarily from the wonderful images, most of which were captured by a helicopter camera. The flight over the rooftops of New York is just as impressive as the one over deserted coastal regions, busy beaches or wide fields. If you like stirring country portraits and exciting travel documentaries, you should definitely get this double DVD. Absolutely worth seeing!

Picture + Sound: The picture quality of the series is really excellent. The image sharpness is even with smaller details on a very high level, the colors look absolutely natural and soiling or other image disturbances you look here absolutely in vain. The stereo sound doesn't seem very spectacular, as it's mostly dominated by the very centrally mixed voice-over commentary. But here and there smaller ambient noises and the music bring some dynamics into the action. Good!

Extras: There is no bonus material on the double DVD.

Conclusion:The East Coast of the USA is a very interesting and fantastically filmed documentary series, which takes the viewer with fascinating images and entertainingly designed portraits on an entertaining and absolutely worth seeing journey from Florida to the Southern States and New York to New Hampshire and Maine, revealing the incredible scenic as well as cultural diversity of the American East Coast. If you like stirring country portraits or nature documentaries and are a fan of the USA, you should definitely grab this one!

Cinema trailer for the movie "The East Coast of the USA - DVD (Deutschland 2014)"
Loading the player ...