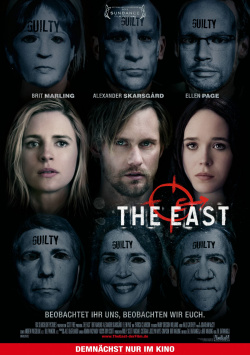 Powerful major corporations find the militant anarchist group calling itself The East more than a little thorn in their side. A large pharmaceutical corporation targeted by the covert group therefore hires a private detective firm to protect the corporation, and especially its wealthy board members, from the actions of capitalism's opponents. To this end, former FBI agent Sarah (Brit Marling), who now works for the detective firm, is to infiltrate The East and thwart the militant outfit's mission from within. In fact, Sarah unexpectedly quickly manages to track down the group and become part of their inner circle. By joining the next guerrilla action, she proves her loyalty even to the highly skeptical Izzy (Ellen Page) - but really to her employer Sharon (Patricia Clarkson). But the longer Sarah finds herself in the company of people she had actually come to regard as eco-terrorists and dangerous would-be do-gooders, the greater her doubts about the veracity of her mission become. Or is her professionalism perhaps being clouded due to emerging feelings for the charismatic Benji (Alexander Skarsgard)?

Following their indie drama Sound of my Voice, which was not only a respectable success at the prestigious Sundance Festival, filmmaker Zal Batmanglij has once again teamed up with his co-writer and lead actress Brit Marling for his second feature The East. The two college friends were inspired by a self-experiment in which they completely disconnected from the consumer world for a summer. Like their protagonist Sarah, the two traveled across the country in freight trains, fed on discarded food and slept with like-minded people in abandoned houses or makeshift tent camps. They have incorporated their experiences on this very special trip into the story of The East.

But instead of pure anarchist consumerism, their film offers a mix of genres to bring their important message to a wider audience. The film has elements of thriller, drama and romance. The discrepancy between the meticulously ordered life Sarah actually leads and the closeness to nature and complete non-conformity she encounters in The East is what makes the story so appealing, showing how important it is to step out of your own personal cocoon and look at the world from a different perspective.

Unfortunately, the film falls back on a few clichés that are supposed to provide a certain authenticity, but in the end have a somewhat opposite effect. For when the members of the anarchist group are shown as tree-hugging nature lovers who perform some kind of naked rituals for inner cohesion, it does seem like a rather hackneyed image. But that, apart from the somewhat overblown ending perhaps, is the only real notable weakness in an overall very interesting and exciting film that boasts an excellent ensemble of actors and quite a few gripping moments.

Although Batmanglij and Marling position themselves quite clearly in their screenplay and the lines between good and evil are drawn very clearly here, the film doesn't thrash its message at the viewer too obtrusively. The entertainment value still comes first, but in the end there's just enough material for extended discussions or intense reflection. It might be that The East doesn't fully exploit its potential and the basic idea is diluted a bit by the somewhat conventional story in the end. Still, all in all Zal Batmanglij succeeded in making a very exciting and intelligent film, which shows that entertainment and ambition are not mutually exclusive. Therefore: with small deductions absolutely worth seeing!