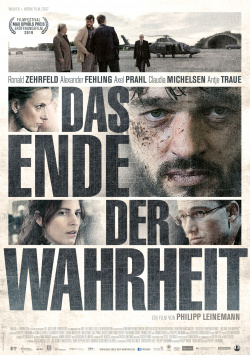 The End of Truth

Martin Behrens (Ronald Zehrfeld), Central Asia expert at the Federal Intelligence Service, is firmly convinced that his work makes the world a little safer. He simply has to accept the fact that there are sometimes unpleasant side effects. But this attitude changes drastically when his secret girlfriend, the journalist Aurice Köhler (Antje Traue) is killed in a supposed terrorist attack on a Munich Caf&eacute;. When Martin finds out what story Aurice had just been researching, his doubts about the BND's mission grow. The more he questions the methods of his superiors, the deeper he gets into a dangerous vortex of intrigue, abuse of power and corruption, where the real threat doesn't seem to come from the outside.

With The End of Truth, director Philipp Leinemann has staged a gripping political thriller that impressively proves that intelligent suspense cinema with high entertainment value can be staged even without a lot of action and a mega budget. The really remarkable thing is that most of the time there is only talking - and yet the whole thing never looks like a small TV production. The film is in a league with international political thrillers, thanks not only to the atmospheric camerawork, but also to the clever staging, which is carried by a top-class ensemble.

Ronald Zehrfeld plays absolutely confident and convincing. Still, it's Alexander Fehling who particularly stands out as the sleazy BND agent. But the other actors and actresses don't have to hide from the great performances of Zehrfeld and Fehling either. They all manage to add depth to the already interesting and multi-layered characters.

Admittedly, some scenes are arguably dialogue-heavy and drag on a bit. And you have to follow the action very attentively to understand the complex story with all its twists and turns. But for that you will be rewarded with a first-class thriller made in Germany, which shows impressively that events from world events can be told not only in heavy consternation cinema, but also as intelligent entertainment. Absolutely worth seeing!

Cinema trailer for the movie "The End of Truth (Deutschland 2019)"
Loading the player ...