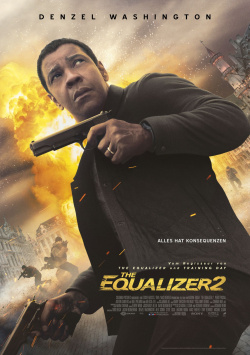 Actually, Robert McCall (Denzel Washington) had retired. But after the events of a few years ago, he has taken up the fight for justice again. While on the outside he leads quite a quiet life, in secret he fights for the people who can't protect themselves. But when a good friend of his is killed, McCall is drawn into a very personal battle that also puts people he was trying to protect in danger. And so he must ask himself how far he is willing to go to get justice.

Antoine Fuqua's big-screen remake of the '80s crime series The Equalizer wasn't an outstanding success in 2014, but it was a thoroughly respectable one, with box-office takings of around $200 million worldwide. Especially Denzel Washington could convince critics and viewers with his crisp 60 years as a taciturn action hero. Four years later now follows the sequel, in which Washington again delivers a spectacular performance, especially in close combat with his opponents. Admittedly, the story is too thin to carry a two-hour film. And so especially in the middle part there are some very clear lengths. But the successful beginning and the grandiose, literally stormy finale easily make up for this weakness.

Despite this, Fuqua would have done well to apply the shears here and there, especially in the first half. He simply opens up too many plot threads that are of little consequence to the actual story and serve more to highlight for the audience what, while of great entertainment value in its own right, would not have been necessary, especially in the sequel. After all, anyone who has seen Part 1 has long known that McCall is a merciless adversary to the bad guys, but otherwise a very good person. For instance, there's a plot line about an old man who McCall, who now outwardly works as a private driver, keeps driving around. Quite a nice story - but completely irrelevant to the film.

It really is worth fighting through the somewhat plodding moments, though. Because the last act is just plain great. Fuqua has staged some quite great action cinema here, rivalling the almost legendary DIY sequence from Part 1 in terms of tension and visuals. So, all in all, The Equalizer 2 is a successful sequel that has a few weaknesses, but also impressively shows that Denzel Washington is a convincing action star and a great actor. And therefore there is also with small deductions an absolutely deserved: Worth seeing!