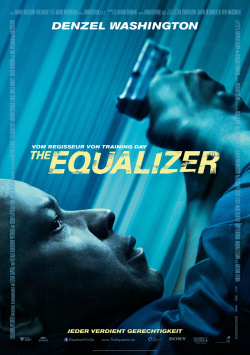 Between 1995 and 1998, in the TV series The Equalizer - The Guardian Angel of New York, Briton Edward Woodward played a former CIA agent who used his skills to help people in need and provide justice where the police and courts failed. Director Antoine Fuqua has now taken the premise of this series as the basis for his version of The Equalizer. The 2014 version now stars Denzel Washington as a former special ops agent who faked his death years ago and went into hiding. Since then, McCall has lived a very quiet life. He works at the hardware store and spends his evenings at the diner with a good book. There he befriends the young prostitute Teri (Chlo&euml; Grace Moretz). When she is brutally beaten up, McCall can no longer look the other way. He wants justice - and for that he sometimes messes with the brutal Russian mafia - because after all, he is the Equalizer!

The Equalizer is a hard action thriller of the old school. Yet it starts off very leisurely. In the first twenty minutes, we see a quiet McCall musing with Teri about The Old Man and the Sea, dancing for nosy colleagues, or helping a friend prepare to become a security guard. But the light, almost cheerful glow that emerges here is hugely deceptive. In order to help the badly battered Teri, he first tries to settle the matter peacefully by trying to buy the girl's freedom. When this attempt fails, McCall shows a completely different facet of his personality. And suddenly the film becomes extremely dark and brutal, so that one wonders more than once that the FSK has given here the gracious release from 16 years. Because especially on the subject of vigilante justice, they are usually not so outspoken here - and if then also glasses and corkscrews end up where they definitely do not belong, one could have quite expected an 18 release.

After his first appearance as Equalizer Denzel Washington remains - apart from a few quieter moments - for the rest of the film in revenge mode. And in doing so, the now nearly 60-year-old Oscar winner cuts a really good figure. With extreme coolness and convincing toughness, Washington not only delivers justice, but in the brilliant finale also ensures that you will never walk through a hardware store again without thinking of The Equalizer. It's thanks to Washington's strong presence and convincing acting that the film works really well not only in the action scenes, but in the more character-driven scenes as well. And that's truly not a given, especially in the action genre.

Certainly, The Equalizer is not a highly intellectual head-turner or a milestone of action cinema. But as pure genre entertainment with a traditional flair, it really works first-rate. Atmospheric camerawork, an atmospheric soundtrack and a well-cast villain in Marton Csokas make this thriller adrenaline-fueled suspense cinema of a particularly entertaining kind, despite a few clichés and dramaturgical weaknesses. Denzel Washington will not win another Oscar with this role. But fans of first-class action thrillers, who besides some bloody interludes also attach importance to something like a story and good actors, will get their money's worth. And for the great showdown alone there is here a very clear: Absolutely worth seeing!

Cinema trailer for the movie "The Equalizer (USA 2014)"
Loading the player ...