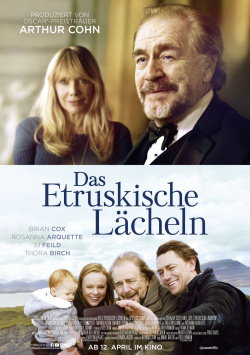 Rory MacNeil (Brian Cox) actually wanted to spend the rest of his life on the remote Scottish island of Vallasay, where he was born and has spent every day of his existence on earth since. He loves his home - despite an old family feud that keeps his blood boiling. But now he must leave Vallasay and travel to San Francisco. He pretends it's to see his estranged son Ian (JJ Field) and finally meet his grandson. But in truth, it is his health that forces Rory to take this step. But in the presence of the little boy, the old curmudgeon discovers whole new sides of himself and when he meets the attractive Claudia (Rosanna Arquette), something like a long extinguished fire even germinates in him again. But with that fire comes the realization that he's made some mistakes in his life - and there's little time to make amends.

The film adaptation of the novel The Etruscan Smile by Jos&eacute; Luis Sampedro is the feature debut of filmmakers Mihal Brezis and Oded Binnun, who were nominated for an OSCAR® in 2015 for their short film "Aya." With the multiple award-winning producer Arthur Cohn, they have an experienced mentor at their side, who, however, can't prevent the production from seeming too clumsy at times. Brezis and Binnun fail to really breathe life into the characters. Especially Ian's wife Emily, but also secondary characters like her father remain extremely pale and are nothing more than walking clichés.

There are really only two reasons why the film still works quite well. One is that the story is simply very beautiful. Sure, it's not particularly original and the final shot is really something any viewer paying a tiny bit of attention will be able to predict after the first third at the latest. Still, the last journey of Rory MacNeil can warm the hearts of viewers. And that brings me to the second reason why the film became worth watching despite its flaws. And that reason is Brian Cox. He manages to pull off the feat of making a whole lot out of even a less than polished written character. He's just fun to watch play. And when his little grandson softens his rugged Scottish heart, it's hard not to shed a few tears there too.

The camerawork is also undoubtedly one of the film's plus points. Both San Francisco and Rory's Scottish home were captured in wonderful images that make it well worth watching The Etruscan Smile in the cinema. All in all, not quite a big hit, but a nice feel-good movie that offers no big surprises, but a nice story and a great leading actor. And for that, the bottom line is a decent: Worth seeing!

Cinema trailer for the movie "The Etruscan Smile (USA 2017)"
Loading the player ...