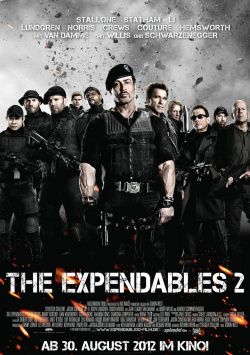 The Botox Retirees Strike Again! After Sylvester Stallone was able to gather an impressive troupe of action veterans around him in 2010, including his Rocky IV partner Dolph Lundgren, Mickey Rourke and, in small supporting roles, Bruce Willis and even Arnold Schwarzenegger, and, spiced up with current genre stars like Jason Statham and Jet Li, kept the box office ringing strong as The Expendables, the obligatory sequel is now hitting theaters. And it doesn't just have more of what the first part had to offer. Not only more stars, more action and more blood. Much more positive is that the sequel also offers exactly what made the first part so disappointing in the eyes of many action fans: much more self-irony and humorous coolness.

The story of course remains in the second attempt secondary matter. After Barney Ross (Stallone) and his squad, which has grown to include top-notch sniper Billy the Kid (Liam Hemsworth), return from a successfully completed mission, the mysterious Mr. Church (Willis) pays the swashbuckler another visit. For Mr. Church feels Ross cheated him out of a few million and offers the mercenary a once-in-a-lifetime chance to settle his debt. The Expendables are to recover an item located in a safe in the middle of a recently crashed plane. Responsible for opening the safe and for its contents is the mysterious Maggie (Yu Nan), whom Ross reluctantly accepts onto his team. Still, the job seems easy and relatively harmless at first glance. But as it turns out, the unscrupulous Vilain (Jean-Claude Van Damme) is also after the contents of the safe. With his men, he lures Barney's squad into a bloody ambush. But what he hasn't reckoned with is that when one Expendable's blood is spilled, the others are out for even bloodier revenge and won't rest until the last enemy has passed on.

Stallone handing over the director's chair to Simon West (Con Air) for The Expendables 2 proves to be a really smart move. For West not only knows very well how to deliver the action in a completely over-the-top brutal but always entertaining way. He also uses the play with the image of his actors and with the clichés of the genre in a very humorous way. When Arnold Schwarzenegger, who like Bruce Willis has a slightly bigger appearance in the second part, utters his Terminator line I'll be back for the umpteenth time and Bruce Willis comments on it in the only right way, it becomes clear that the old men don't take themselves too seriously anymore. Also with the wonderful guest appearance of Chuck Norris, who is responsible for one of the best sayings of the film, a lot of self-deprecating served nostalgia comes up.

Admittedly, in the slightly more dramatic, emotional moments also part 2 of the mercenary battle plate can not really convince. But West quickly makes it clear that plot is an absolute secondary matter for him. So in the very first ten minutes not only are several buildings reduced to rubble and ships blown up. In addition, countless life lights are blown out in an almost grotesquely brutal manner - of course always with the appropriate cool saying on the lips. Political correctness is out of place here. Here it is only about an unrestrained destruction orgy, which uses the best elements of the 80s action classics and at the same time pays homage to their icons in a humorous way.

The Expendables 2 is certainly not a particularly good film in terms of content. But that aside, at least it's quite convincing in terms of its craftsmanship. This sequel may not be particularly intelligent, but it's just wonderfully irreverent fun that, in the moments when it doesn't take itself particularly seriously (and thankfully that's the case for most of its 100-minute running time), offers action entertainment at its finest. Some of the really good gags, however, will likely only be apparent to viewers who consumed heavy action fare in the '80s or who later became familiar with the genre works of that era. One can already look forward to which action veteran Stallone will bring out of retirement for a possible third part. Absolutely worth seeing