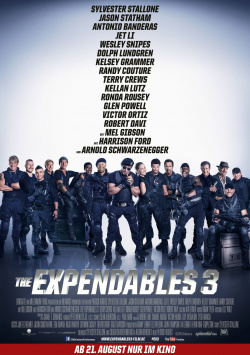 The old warhorses of the Expendables around top mercenary Barney Ross (Sylvester Stallone) are back in action. After a spectacular rescue operation has expanded the team to include Doctor Death (Wesley Snipes), a fighter who has been imprisoned for years, they immediately set out on their next assignment. They are to prevent a dangerous weapon from falling into the hands of an internationally wanted arms dealer. But the mission goes differently than planned. First, Hale Caesar (Terry Crews) is seriously injured. And then Barney has to realize that the arms dealer is his former partner and Expendables co-founder Conrad Stonebanks (Mel Gibson), who he thought he killed ten years ago. When Barney is tasked by CIA official Max Drummer (Harrison Ford) to take down Stonebanks, the mercenary makes a tough decision: he dismisses his old team and recruits a group of younger fighters (Kellan Lutz, Ronda Rousey, Glen Powell and Victor Ortiz) with his old sidekick Bonaparte (Kelsey Grammer) to handle this explosive assignment. But that doesn't turn out to be a particularly good idea, as the rookies soon fall into a trap cleverly laid out by Stonebanks. But luckily the old Expendables don't let their leader push them to the siding so easily and show with concentrated power what real guys are capable of. But is that enough to win against a whole army of Stonebanks?

Already three weeks before the US release of The Expendables 3, an illegal copy of the film in very good quality circulated on the net, which was then downloaded several hundred thousand times. For the studio, this is the clear reason why the film had a bitter crash landing on the opening weekend in the USA. But with this, the responsible parties are making it too easy for themselves. Because there are two reasons that speak against this assumption. For example, the action thriller is not the first film that has surfaced on the net before its release. But not all movies have been hurt by this. The Will Smith blockbuster I am Legend, for example, was available on the net in top DVD quality shortly before its release and still grossed over $700 million worldwide. The second reason is the fact that many fans were already averse to the film in advance, since unlike the first two installments, this time it was intended to reach a younger target audience and the action was also significantly toned down to that end - with the prospect of a tougher version in the home theatrical release.

And therein lies the real problem with The Expendables 3: why should fans spend big bucks on a version they don't want to see? And can even a toned-down version appeal to a younger demographic at all? After all, what viewers under 18 actually care about a troupe of aging action stars? Of course, it's also just conjecture that the film's failure in the U.S. is due to alienating loyal fans simply by trying to lure viewers into the theater who aren't actually interested in the flick. But it's certainly a more plausible reason than trying to put all the blame on internet piracy.

Besides that, of course, the first priority is to ask a very essential question: is The Expendables 3 a good movie worth going to the movies for? The answer is a very clear no. Yes, when it comes to the action. No, when it comes to the rest of the somewhat too talky movie. The last third is pure action and is accordingly a lot of fun. Especially for children of the 80s it is a feast when Rambo and Riggs beat each other up, while Indiana Jones and the Terminator fire from all guns against all kinds of bad guys. But as good as this explosive and delightfully over-the-top action interlude is, the sprawling conversations about war trauma, honor, and true male friendship are tedious and boring. Something like that can work, but it needs a really good script - and this movie really doesn't have that.

If The Expendables 3 just wants to be a pointless fun movie, then this third outing of the action pensioners is really good and at least far superior to the first part. But any attempt to add anything like depth to the story clearly comes at the expense of entertainment value, turning the flick into an unnecessarily drawn out, half-baked delight. And it's only because of this that even the toned down action scenes come off negatively. While internet piracy may be one reason why the film disappointed at the US box office, the rather disappointing script and the completely unnecessary pandering to the wrong target audience are probably primarily to blame.

Despite this, if you watch the film with the right audience (80s action fans) and don't take the whole thing too seriously even when the production is trying to be pretentious, then the reunion of some real action icons is absolutely worth seeing. However, if you're hoping for non-stop action with iconic moments like Chuck Norris' wonderfully absurd guest appearance in Part 2, you'll surely be disappointed here. Therefore: Only with deductions worth seeing!