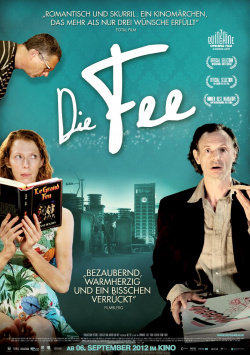 Shy Dom (Dominique Abel), who works as a night watchman in a hotel in Le Havre, is astonished when one evening a woman stands in front of him claiming to be a fairy who can grant him three wishes. Dom doubts at first that Fiona (Fiona Gordon) really is a fairy, but when his first two wishes actually come true and the two spend an unforgettable night together, it's clear to the night watchman that Fiona is not only a fairy, but also the love of his life. It's just too bad that he can't tell his beloved about this realization, because Fiona has disappeared. And Dom must now do everything possible to find her again - after all, he still has a wish with her good.

An extremely short-sighted waiter, a hotel guest who smuggles his dog into the hotel in a very conspicuously inconspicuous way, a group of fugitives sleeping together in the trunk of a car on the beach, arguably the most bizarre pregnancy and childbirth in film history, these are just some of the aspects that make this playful, original and completely absurd comedy from Belgium so worth watching. The trio of Fiona Gordon, Dominique Abel and Bruno Romy, who as a collective have already directed the films Iceberg and Rumba together in front of and behind the camera, mix in The Fairy the taciturn humour of a Jacques Tati with avant-garde dance choreography that would have delighted Pina Bausch. Physical comedy with obvious borrowings from great masters of the past is mixed with very modern ideas all its own to create a wonderfully colourful burlesque, enriched with lovingly imperfect but wonderfully imaginative effects.

An underwater dance sequence is one of the visual highlights of a film that stands apart in almost every aspect from anything currently in cinema. The charming naivety, the unrestrained desire to try things out and the wonderfully abstruse comedy make this film a very special viewing experience. Admittedly, the trio's idiosyncratic style doesn't quite want to work for 90 minutes. Some aspects seem a bit overused after a while. But somehow it's hard to resent the film, because it obviously has only one goal: to make the audience happy.

And this succeeds also because here just the imperfect is downright celebrated. Because not only the effects are deliberately imperfectly implemented. The characters in the story aren't particularly beautiful on the outside either, many are handicapped in some way. Yet they all, like the story, exude such a light-heartedness and joie de vivre that this can only be described as beautiful. Certainly, The Fairy is not a film for a broad mainstream audience. You have to be able to get involved with the very special way Gordon, Abel and Romy tell their story in order to succumb to the magic of the film. But if you succeed, you will be rewarded with one of the most beautiful fairy tales of the year and a wonderfully playful production. Therefore, for arthouse lovers who love comedy of a very special kind and like to get involved in cinematic experiments, this film is a must! Absolutely worth seeing

Cinema trailer for the movie "The Fairy (Frankreich/Belgien 2011)"
Loading the player ...