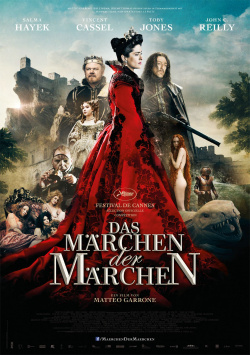 The Tale of Tales

Once upon a time... a land of magic and mystical beings. Here, three kingdoms coexist in peaceful harmony. The Queen of Longtrellis (Salma Hayek) wants nothing more than to have a child. Unfortunately, the king (John C. Reilly) hasn't been able to give her one yet, so he resorts to unusual means: the heart of a sea monster is supposed to bring an immediate pregnancy. But of course such a spell comes at a price. In neighbouring Strongcliff, the king (Vincent Cassel) indulges his penchant for beautiful women, but is a little bored as he is sure he has had every woman in his kingdom in his bed by now. But then he falls head over heels in love with a mysterious woman whose face he has never seen before. But her voice alone is enough to drive him completely mad. He has no idea that his beloved is the ugly old woman Dora (Hayley Carmichael), who lives in complete seclusion with her sister Imma (Shirley Henderson). But then a spell turns her into a beautiful young woman (Stacy Martin) - with unexpected consequences. And in Highhill, the single-parent King (Toby Jones) also has to deal with very special problems. After the death of his beloved giant flea, he calls for a contest: whoever can guess which animal the flea was based on the flayed skin of the creature gets to marry his daughter Violet (bebe Cave). Too bad that a wild ogre, of all things, emerges as the winner of the contest...

For his latest film, acclaimed filmmaker Matteo Garrone (Gomorrah) has woven three of the 50 fairy tales from the book Il Racconto die Racconti, or The Fairy Tale of Fairy Tales, by Giambattista Basile (1570 - 1632) into a whimsical, grotesque rush of images. Although there are fairies, mythical creatures and a beautiful queen, this film is truly not for children. For Garrone is not stingy with cruelty and eroticism, with dark despair and deadly love, in addition to beautiful and imaginative images. No wonder, since these are all ingredients of the original, which already inspired the Brothers Grimm to some of their fairy tales. With great costumes, a grand set and atmospheric locations, visually The Fairy Tale of Fairy Tales is truly a feast for the senses.

This is only partially true of the rest of the production, however. In many scenes, Garrone relies on indulgent slowness, which makes the narrative flow seem arguably plodding in places. At the same time, some plot elements are only hinted at, which is why some viewers might wonder what the point of it all is from time to time. Of course, the stories are fairy tales with a lot of symbolism and room for interpretation. Not everything needs to be explained down to the smallest detail. But since some enormous lengths might just make some people less interested in giving much thought to the meaning of the stories, the dramaturgy can seem a bit thin.

The unwieldy production clearly dulls the entertainment value of what is in other aspects such a successful fairy tale film. What should be nothing but enjoyable is often just exhausting, which even the great pictures can't make up for at some point. Certainly, Garrone can be credited with directing such a film beyond the mainstream, creating something truly original and special. And there will definitely be viewers who will appreciate just that about this work. But it certainly would have been feasible to combine artistic ambition and creative independence with accessibility for a wider audience. Thus, The Fairy Tale of Fairy Tales has become an artistically valuable, but in terms of content a bit too elitist and thus undercooled film, which from a visual point of view would have deserved to be able to appeal to more viewers. Only worth seeing with cutbacks!

Cinema trailer for the movie "The Tale of Tales (Großbritannien/Italien/Frankreich 2015)"
Loading the player ...