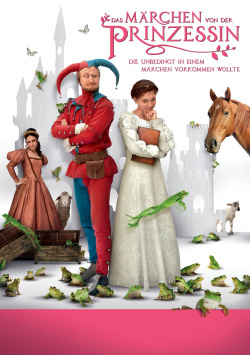 The young princess Clara (Hanna Merki) would so much like to be just like the princesses she always reads about in fairy tales. Just as her arrogant sister Quendolin (Jasmin Barbara Mairhofer) is: dignified, elegant and beautiful. Clara, on the other hand, is clumsy and a master at putting her foot in her mouth. Her father, King Henry (Oliver Karbus), regularly despairs of his daughter and when she also destroys a valuable embroidery, he finally gives up hope that she might one day become a worthy queen. That's when Clara has had enough. She no longer wants to be the chaotic girl, but an elegant princess who can win the heart of her prince. With the help of the court jester Michel (Michael Kranz), she wants to do the same as the heroines from her fairy tales and thus win back her father's respect. But it is not so easy to kiss the right frog or to be eaten by the evil wolf, as she is made to believe in the fairy tales.

The fairy tale of the princess who desperately wanted to be in a fairy tale is based on the children's book of the same name by Susanne Straßer, in which the fairy tales of the Brothers Grimm were played with in a loving and amusing way. And director Steffen Zacke also tries to implement this aspect of the original in a charming and original way. He summarizes the actual fairy tales in short animated sequences in a rather unconventional way, with Sky du Mont acting as the fairy tale narrator with his warm voice. Afterwards, Clara tries to re-enact these very fairy tales, which is accompanied by disasters that are especially comical for children.

Anyway, smaller fairy tale fans will enjoy the rather simple gags, the lovingly designed costumes and the rather quirky characters. From the point of view of an adult viewer, however, it is a pity that especially in terms of humour and presentation subtlety has been completely dispensed with and the whole thing therefore lacks the charm that makes so many other film fairy tales worth watching across generations. For example, the fact that the girls display a demeanor that is more reminiscent of normal teenagers and stuck-up bitches and less of real fairy tale princesses, it is difficult to let yourself be carried away into the fairy tale realm by the otherwise quite present magic of the amusing story.

The beautiful locations in South Tyrol and Bavaria, the harmless, child-friendly humor, a sympathetic heroine and the many witty ideas of the book template, however, ultimately ensure that The Tale of the Princess Who Desperately Wanted to Be in a Fairy Tale has become absolutely worth seeing for its young target audience, primarily girls between 5 and 9 years, despite its weaknesses.

Cinema trailer for the movie "The fairy tale of the princess who desperately wanted to be in a fairy tale (Deutschland 2013)"
Loading the player ...