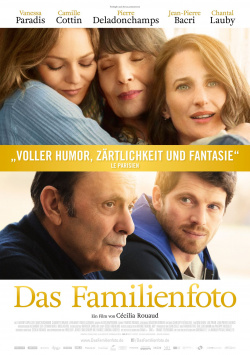 Siblings Gabrielle (Vanessa Paradis), Elsa (Camille Cottin) and Mao (Pierre Deladonchamps) have little to do with each other anymore. They lead completely different lives that don't exactly harmonize perfectly. Family reunions are few and far between, as father Pierre (Jean-Pierre Bacri) and mother Claudine (Chantal Lauby) have been divorced for years. But when their grandfather dies and their demented grandmother (Claudette Walker) is left all alone, the family must pull together to make what time she has left as comfortable as possible for the old lady. But in order to do so, the siblings and their parents must first come to grips with their own chaos.

The family picture stands out for its complete lack of surprises. The mix of family comedy and drama is staged as if by textbook, leaving hardly a cliché unturned. French cinema of this kind comes to Germany again and again and finds its audience at least in the arthouse cinemas. Director C&eacute;cilia Rouaud's second feature film will certainly succeed in doing so. Still, there is unlikely to be ANYONE who will remember this work a year from now.

For that, the story is simply too predictably told and the characters too superficially drawn. Yes, there are some very nice moments that touch the heart. And yes, there are some good laughs too. There are also some interesting and socially important issues raised. But the production is seemingly so concerned with not hurting anyone that all the interesting and well-done aspects end up being too well-behaved and almost inconsequential. This is - at least for fans of light French entertainment cinema - entertaining to watch. However, shortly after watching it, this family picture already fades away.

If you just want to switch off for around 90 minutes and don't care much about depth - even if it's a bit pretended - you'll be in good hands with The Family Photo. Those who expect more from a French drama will probably leave the cinema very disappointed. Therefore, the bottom line is: Only worth seeing with restrictions!

Cinema trailer for the movie "The Family Photo (Frankreich 2018)"
Loading the player ...