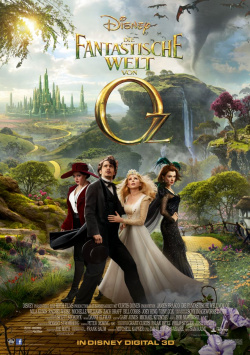 The Fantastic World of Oz

The Wizard of Oz story is known to almost every child, especially in the United States. Since its first publication in 1900, Lyman Frank Baum's book has become a true classic of children's literature. Numerous sequels, a good dozen of which were penned by Baum alone, comics and, of course, several film and TV adaptations have made the world of Oz and its inhabitants immortal. Especially the film version from 1939 with Judy Garland as the girl Dorothy, who moves from Kansas to Oz, has contributed to the lasting popularity of the stories. Now Spider-Man director Sam Raimi, once a specialist in gory horror films (Dance of the Devils), has taken on the material. However, he did not want to offer a remake of the well-known story about Dorothy. Rather, he wanted to focus on the previously untold backstory, which tells how the wizard himself once came to Oz.

The Fantastic World of Oz begins at a small fair in Kansas, where circus magician Oscar Diggs (James Franco) is only out to pull money out of his audience's pockets and break the hearts of innocent women. And of course, that gets him into a lot of trouble. When Oscar has to run away, he manages to escape in a hot air balloon. But it doesn't take him to safety, but to the distant, magical land of Oz. There he meets the beautiful witch Theodora (Mila Kunis), who is convinced that Oscar is the great wizard rumored to be coming to rid the land of the evil witch Glinda (Michelle Williams). Theodora's beauty and the riches promised him by her sister Evanora (Rachel Weisz) prevent Oscar from clearing up the misconception surrounding his identity. Somehow, he'll find a way to defeat the evil witch and become the King of Oz. But when he actually makes it to Glinda's kingdom with the help of Finley the flying monkey and a little porcelain girl, it turns out that things are quite different than he previously believed and that the real danger comes from a completely different side. And so he soon has to decide whether to fight for Oz or escape back to Kansas as quickly as possible.

Sam Raimi's journey to the origins of the Wizard of Oz begins with a quite enchanting and amusing opening sequence. Shot in black and white, the scene is full of humour and original ideas, and shows James Franco at his most delightfully self-deprecatingly smarmy. These first five minutes lead us to hope for some great fun for the whole family, a hope that is soon dashed, however. As soon as Oscar is picked up by a tornado in his hot air balloon and spat out in Oz, the whole thing becomes extremely colourful and extremely artificial. For example, when Oscar first walks with Theodora down the road that inspired Elton John's worldwide hit Goodbye Yellow Brick Road, you can see so clearly that the actors here were acting in front of a green screen and the background was added digitally later that it's almost impossible to get lost in this world.

The landscapes and plants are technically perfectly animated. But on the one hand they look too overstylized and sterile to be really fascinating. On the other hand they remind very much of the world created for Tim Burton's Alice in Wonderland. What's missing here is something of its own, that very special something that can make the viewer marvel. Sure, some scenes have a lot of show value. But this version of Oz simply lacks charm and warmth, and doesn't really have anything to offer that will last in the memory. The same goes for the characters, who are also all nice to look at, but ultimately remain as empty and cold as the computer-generated landscape.

The humor is aimed more at a young audience. This is especially true of the character of Finley the flying monkey, who, as Oscar's sidekick, is guaranteed to make kids laugh with his patter. Older viewers, on the other hand, might quickly get annoyed by this not really cute-looking creature. But even if the gags are rather child-friendly, this is not true for the whole movie. Some sequences are quite dark and brutal, so that very young viewers might get scared. By the good 3D effects this is of course still intensified.

The actors are so far in order. James Franco is convincing as the hero against his will as well as Rachel Weisz, who played the role of the evil Evanora with obvious pleasure. Michelle Williams is hardly allowed to show any of her talent and also Mila Kunis has to hide behind a not really convincing mask for long stretches of the film. Story, actors, visuals - all that is quite nice, but just not more. From a director like Sam Raimi much better could have been expected. If you just want to experience a pure 3D picture rush and don't mind that the fantasy adventure lacks soul and charm, you will love to dive into The Fantastic World of Oz and have a lot of fun fighting the evil witch. However, if you expect more from entertaining popcorn cinema than a few snappy special effects and a flash of color, this CGI overkill will leave you rather cold. Therefore: at least for fans of films like Alice in Wonderland with deductions worth seeing!

Cinema trailer for the movie "The Fantastic World of Oz (USA 2012)"
Loading the player ...