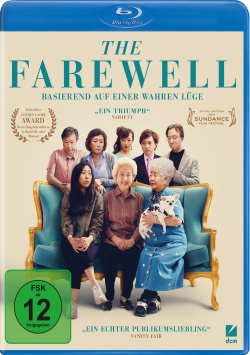 Film: For Billi (Awkwafina) life in New York is not going well at the moment. But the worst news comes from China: Her beloved grandmother Nai Nai (Shuzhen Zhao) is suffering from cancer and probably has only a short time to live. However, the family has decided not to tell Nai Nai about the seriousness of her illness. In order for the whole family, including the members who are now living abroad, to be able to say goodbye, a wedding is organized for Billi's cousin Hao Hao. Billi also travels with her parents to the turbulent family celebration, where everyone tries to keep up the lie. Billi finds it increasingly difficult to lie to her grandmother. But while she struggles with her conscience and against the expectations of her family, during her time in China she learns to see her past, her roots and also her family with completely new eyes.

The story of the critic's favourite "The Farewell" is actually based on a true lie. The family of scriptwriter and director Lulu Wang actually hid the diagnosis from her grandmother that she was terminally ill with cancer. Also, the idea of organizing a wedding as an excuse for all family members to get together to say goodbye to the old lady is anchored in reality. Although she also allowed herself some dramaturgical liberties, the result is a very intimate and honest film that wonderfully balances comedy and tragedy.

So it never gets too overly silly, but also not too maudlin or even kitschy. With a sensitive hand Wang draws a story about farewell, but also about role assignments within the family and the sometimes existing necessity to break out of them. The whole thing is staged very subtle, so that you won't even realize how much the story is getting to your heart. Almost at the very end there is a small shot, but then all the dams break. That a simple wave is enough to bring tears to your eyes is proof of the director's great craftsmanship.

But also the great ensemble has to be paid tribute to, especially Awkwafina, who until now has become rather famous for comical roles in movies like "Crazy Rich Asians", "Ocean`s 8" or "Jumanji 2". Here she shows a much wider range of her skills and convinces all along the line. It's really nice that Lulu Wang fought so hard for her movie, that her film, which was not western enough for American financiers and chinese financiers too western, could actually become reality. Otherwise, cinema would have been poorer by one wonderful movie. That's what they clearly stand for: Absolutely worth seeing! p>/p>

image + sound:p>/strong> The visual language seems on the one hand very authentic, but at the same time almost fairy-tale like. The atmospheric colouring, the good overall sharpness and the harmonious mixture of contrasts underline this impression very well. The sound is available on the Blu-ray in a DTS HD MA 5.1 mix, which is overall very reserved, but can convince with well understandably mixed dialogues and atmospheric ambient noises. Good!

Extras: Unfortunately there isn't any bonus material.</Conclusion: "The Farewell" is a wonderful piece of feel-good cinema - just the right thing at this time. The unbelievably true story has been realised with a lot of heart, even more charm and pleasantly sensitive humour. The Blu-ray shows the film in good picture and sound quality, unfortunately there is no bonus material. But just for the movie alone there is a very clear: Absolutely recommendable!</p>