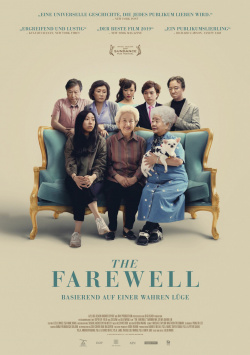 For Billi (Awkwafina), life in New York is not going well at all right now. But the worst news comes from China: her beloved grandmother Nai Nai (Shuzhen Zhao) has been diagnosed with cancer and probably only has a short time to live. However, the family has decided not to tell Nai Nai about the seriousness of her illness. In order for the whole family, including the members who are now living abroad, to say goodbye, a wedding is unceremoniously organized for Billi's cousin Hao Hao. Billi also travels with her parents to the tumultuous family celebration, where everyone tries to keep up the lie. Billi finds it increasingly difficult to lie to her grandmother. But as she struggles with her conscience and against her family's expectations, she learns to see her past, her roots, and even her family through a whole new set of eyes during her time in China.

The story of critical darling The Farewell is actually based on a true lie. Writer-director Lulu Wang's family actually kept the diagnosis from her grandmother that she was terminally ill with cancer. The idea of organizing a wedding as an excuse for all the family members to get together to say goodbye to the old lady is also grounded in reality. Although she also took some dramaturgical liberties, the result is a very intimate and honest film that beautifully balances comedy and tragedy.

Thus, it never gets too over-the-top silly, but neither does it get too maudlin or even cheesy. With a sensitive hand, Wang draws a story about saying goodbye, but also about role assignments within the family and the sometimes need to break out of them. The whole thing is staged very subtly, so that you don't even notice how much the story gets to your heart. Almost at the very end there is a small shot, but then all dams break. That a simple wave is enough to bring tears to your eyes is a testament to great craftsmanship on the part of the director.

But tribute must also be paid to the terrific ensemble, especially Awkwafina, who until now has been better known for comedic roles in films like Crazy Rich Asians, Ocean`s 8 or Jumanji 2. Here, she shows a much wider range of her skills and is convincing all the way. It`s really nice that Lulu Wang fought so hard for her film, which was not western enough for American financiers and too western for Chinese financiers, to actually become a reality. Because otherwise cinema would really be poorer by a quite wonderful film. For this, there is clearly a: Absolutely worth seeing!

Cinema trailer for the movie "The Farewell (USA/China 2019)"
Loading the player ...