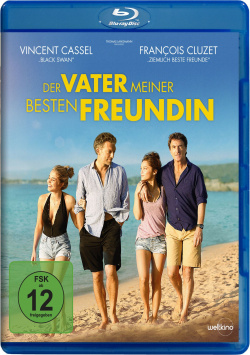 The father of my best friend - Blu-ray

Movie: It should actually be a relaxed holiday on Corsica for the best friends Laurent (Vincent Cassel) and Antoine (François Cluzet). Together with their teenage daughters Marie (Alice Isaaz) and Louna (Lola Le Lann) they want to enjoy the sun, the sea and the sweet doing nothing in the old house of Antoine's deceased father. But the bad mood of the two girls also threatens to spoil the joy of the fathers on this holiday. But when the two friends discover that there are also some boys from their school in Corsica, their spirits rise enormously. Now it could be a really relaxed holiday - Louna wouldn't fall in love with Laurent of all people. She never misses an opportunity to drive him mad with her charms until he gives in to her seduction in a weak moment. And that of course has consequences that could forever break the long-lasting friendship between Laurent and Antoine…

"The father of my best friend" is a remake of the 1977 film "A moment of confusion" by Claude Berri. Director Jean-François Richet ("Public Enemy No. 1", "Das Ende - Assault on Precinct 13") approaches the story a little differently than its predecessor. Because in the late 70s this topic was dealt with in a different way than it is today. Fortunately, he didn't succumb to the temptation of staging his version as a pompous erotic drama. Louna uses her charms to get Laurent out of her mind and is very sexy until the object of her desire finally succumbs to her Lolita charm. But this only takes up a very small part of the movie. First and foremost Richet tells the story of a friendship, a story about missed opportunities and about the fear of aging.

At the same time he also captures very well how Laurent's daughter deals with the realization that her best friend probably slept with her father. How the girl, who already suffers from the separation of her parents, deals with this breach of trust, at the same time knowing what it would mean for the friendship of Laurent and Antoine if she revealed this secret. All this sounds like the stuff of a heavy drama. But in fact the staging is pleasantly light-footed and humorous. Of course there is a serious basic tone, which also comes to the fore again and again. But first and foremost "The Father of My Best Friend" is a relaxed entertainment film and not a deep psychological study - and that's a good thing.

Convincing actors, wonderful shots of Corsica, which immediately make you want to go on holiday, as well as some very amusing moments make sure that this remake has not only become a very independent work, which only in the core of the story does not differ from the original. The movie has become very entertaining and entertaining despite some small hitches. Those who appreciate light French cinema with high show values and good actors will be very well served here. And for that there is a more than satisfied one: Worth seeing!

Picture + sound: The wonderful landscape shots of Corsica are also shown to advantage in home cinema. The colours are powerfully mixed and the overall sharpness is at a very high level. Even in darker scenes the many small details come into their own very well. The sound is available in a pleasantly dynamic stereo DTS-HD MA mix, which not only lets the voices sound out of the speakers in a clear and understandable way, but also provides some movement in the multichannel area every now and then with well implemented sound effects such as the trigger-happy Antoine and the music at the beach party. Good!

Extras: As a bonus there's a very detailed interview with the two main actors, who not only talk about the shooting, but also about the differences to the original from 1977. A good and really worth seeing interview.

Fazit: "The father of my best friend" is a harmonious mixture of drama and comedy, which can score with good actors, beautiful pictures and a nice story. The Blu-ray presents the remake of the 70s success "A Moment of Confusion" in good picture and sound quality. The bonus material isn't very lush, but the interview with the two main actors is well worth seeing. At the end there is a clear one: Recommendable!