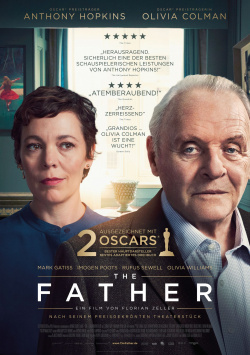 Anthony (Anthony Hopkins) is having more and more trouble managing his daily life in his large London flat. His daughter Anne (Olivia Colman) cares for him sacrificially, but is certain that the old man needs professional help. However, Anthony is a stubborn man who gives every caregiver the run-around. But then Anne opens up to him about moving to Paris with a new man by her side. From then on, things get more and more confusing: a strange man is suddenly sitting in his living room, claiming to have been married to Anne for ten years. In addition, Anthony would be long ago no longer in his apartment, but in that of Anne and her husband. More and more changes pile up on Anthony, who soon can no longer tell what is reality and what his mind is just imagining...

The French playwright Florian Zeller was allowed to adapt his play "The Father", which premiered in 2012, for the big screen himself. Zeller wrote the Oscar-winning screenplay with the British playwright Christopher Hampton, who also translated the play into English. The result is the moving drama "The Father", which is masterful in several respects: On the one hand, there is the rightly award-winning performance of Anthony Hopkins, who delivers one of the strongest and most moving performances of his career. Especially in moments when he largely withdraws and only acts with minimal facial expressions and small gestures, the whole genius of his play is revealed.

At his side also acts very strong Oscar winner Olivia Coleman, who the fatigue, sadness and love that her character feels can be seen in every second. Acting-wise the film is great cinema. The fact that this also applies to the dramaturgical and visual execution is another feat that Zeller has managed to pull off in his feature debut. He makes it empathetic in a haunting but not intrusive way what it must feel like when your mind gradually says goodbye. You can feel the confusion, the fear and the helplessness that Anthony goes through over the course of 90 or so minutes.

This is particularly superbly realised in a scene that goes round in circles in a truly brilliant way. It is written and filmed in such a way that it moves forward, but at the same time returns to the beginning, leaving Anthony completely confused at the end. A real tour de force of script, direction and cinematography!

"The Father" is a film that lingers. It is a depressing, yet in its own way wonderful and deeply human film that proves how powerful cinema can be with simple means. Sometimes it only takes a few words, looks and camera angles to achieve very, very big emotions. A small masterpiece that you should not miss. Absolutely worth seeing!

Cinema trailer for the movie "The Father (Großbritannien 2020)"
Loading the player ...