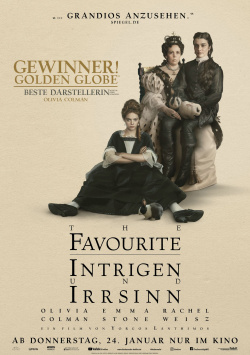 The Favourite - Intrigue and Madness

Although she comes from an aristocratic family, young Abigail Masham (Emma Stone) lives in poor circumstances in 18th century England. When she is given the opportunity to work as a servant at the court of Queen Anne (Olivia Colman), she sees it as a chance to restore her former status. Lady Sarah Churchill (Rachel Weisz), a close confidante of the Queen's who handles the affairs of state for the frail monarch, is quickly taken with Abigail's charisma and takes the girl under her wing. Abigail uses this to ingratiate herself with the Queen and become her new friend. By the time Sarah realizes what Abigail's goals are, she already has the full confidence of the quick-tempered queen. And so begins a game of intrigue and madness at court, which even the war against France cannot put an end to.

With his films The Lobster and The Killing of a Sacred Deer, Greek director Yorgos Lanthimos has established himself as a master of non-conformist arthouse cinema. His latest work, the costume drama The Favourite, seems almost Maonstream in comparison. But only almost. Because time and again Lanthimos intersperses scenes that make it impossible to assign the film to a clear category. Is it a comedy? A farce? A drama? Or is it a profound portrait of morality? Somehow it ends up being a little bit of everything - and yet again, none of them. That makes the end result interesting - but also difficult to access.

It's almost impossible to judge the film as a whole. Because it's just too unbalanced. Rather, The Favourite thrives on individual moments. For instance, from the great performances of Olivia Colman as Queen, who seems playful and naive on the one hand, and on the other, effervescent and almost maniacal. Or from the scenes in which Emma Stone is allowed to fully play out the scheming side of her character. And even when the production makes use of truly wicked humor, it makes for very successful moments. On the other hand, there are also scenes in which the action is dragged out endlessly or in which what is shown doesn't really help to push the story forward. Then the film turns into an unwieldy drama, which brings down the just-as-high entertainment value to a minimum.

The Favourite is a good film with great actresses and great moments. But time and time again, the staging feels - intentionally or unintentionally - too indecisive to really carry you along in the end. With a slightly clearer narrative tone and a few well-placed cuts, this could have been a truly great work. Of course, it's also possible that I'm completely misreading Yorgos Lanthimos' intentions and the film turned out to be exactly the work he had in mind. His fans might love that - it rather bothered me. And that's why I give it the deserved "worth seeing" with some restrictions

Cinema trailer for the movie "The Favourite - Intrigue and Madness (USA/Irland/UK 2018)"
Loading the player ...