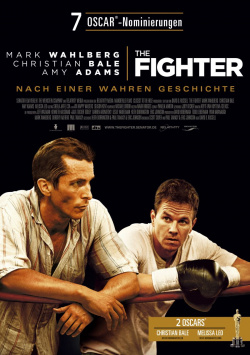 Six years after his last film, I Heart Huckabees, Three Kings director David O. Russell has taken his time to bring a new work to theaters. With The Fighter, the true story of world boxing champion Micky Ward, Russell makes a more than impressive return.

Rightly, Micky Ward (Mark Wahlberg) hasn't had much luck in his life so far. It seems he hasn't been granted the opportunity to break out of the working class in the small town of Lowell. His half-brother Dicky (Christian Bale) had that chance when he was a boxer and even made it to a fight against the legendary Sugar Ray Leonard. But in the meantime Dicky is caught in the drug swamp. But now Micky wants to know it. With Dicky as a trainer at his side, he wants to try it again as a boxer. Accompanied by a crew of documentary filmmakers, the dream of great success is to be captured. But a painful defeat, Dicky's imprisonment and a documentary focusing only on the decline of his half-brother, the dream seems to finally burst. But Micky doesn't give up that easily....

The Fighter, though the story may suggest otherwise, is not a boxing movie. Sure, the extremely realistically filmed boxing matches leave quite an impression are essential to the story. But in the foreground of the drama is rather the relationship between the brothers, the hard everyday life of the American working class and the complicated relationship between Micky and his bossy mother. In itself, this gripping milieu study could have been the big hit for Mark Wahlberg, who finally presents himself as a convincing character actor. But the show is stolen from him twice.

For Christian Bale's performance, rightly rewarded with an Oscar and other prizes, is what remains most intensely in the memory at the end of this superbly written drama. Bale shows full physical commitment here, as he did in The Machinist, and embodies the fallen junkie with tremendous conviction. But Melissa Leo, also an Oscar winner, delivers a great performance as the overprotective and overly domineering mother Alice, completely outshining Wahlberg, who also acts very well. Amy Adams also leaves a lasting impression as Micky's girlfriend Charlene. The confrontation between Charlene, who wants to free Micky from the shackles of his family, and his mother with her seven daughters in tow is one of the film's great highlights. It is this very strength that gives vivid expression to the power of David O. Russel's production.

Because the director skillfully prevents The Fighter from getting lost in absolute dreariness. It's about drugs, unemployment and shattered dreams. But underneath it all, there is an extremely positive underlying tone that is maintained throughout the film with many surprisingly humorous scenes. The Fighter is all great acting, an engaging drama about the power of dreaming and proof that life keeps writing the best stories. Micky Ward and Dicky Eklund, featured at the end of the film, are a perfect example of this. An authentic film without kitsch and pathos, which reveals a lot of heart under its rugged surface. Great and absolutely worth seeing!