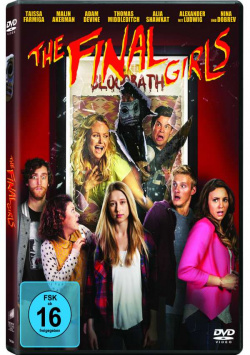 Film: Amanda Cartwright (Malin Akerman) was the big star of the slasher film in the 1980s. Her role in the classic Camp Blutbad made her the scream queen icon of an entire generation. Now it's the anniversary of the actress' death in a car accident far too soon. On this day of all days, Amanda's daughter Max (Taissa Farmiga) is scheduled to attend a screening of Camp Bloodbath. Although the pain still runs deep, Max goes to the screening with her best friend Gertie (Alia Shawkat) and her crush Chris (Alexander Ludwig), where she immediately experiences her first disaster when bitch Vicki (Nina Dobrev), Chris' ex, and dorky nerd Duncan (Thomas Middleditch) also show up there. But things get really bad when a fire breaks out in the cinema during the screening and the five take refuge behind the screen, only to suddenly find themselves in the middle of Camp Blutbad. Using their knowledge of the film, they try to save themselves from the nasty masked killer. And Max sees her chance has come to finally be with her mother again.

The Final Girls is a humorous homage to the slasher movies of the 80s, most especially, of course, Friday the 13th. If you know the original, its various sequels and plagiarisms, you'll really enjoy this one. With a lot of love for the genre, director Todd Strauss-Schulson plays with all the clichés, which he then varies in an amusing way or turns on its head. The fact that the young people who are transported into the film, just all these clichés are fully aware of and try to use this knowledge to escape the - of course masked - killer and his various murder tools, provides connoisseurs of the genre for a very high entertainment value.

Admittedly, in some places, the potential of such homage is not quite used. There some gags also fall out sometimes too flat, while the kills are presented surprisingly restrained. But not only in terms of bloodshed, also in terms of sex Strauss-Schulson switches back significantly compared to the films he satirizes here, which may well bother some genre fans. However, those who can accept the fact that this tongue-in-cheek slasher is never in danger of getting an 18 rating will still enjoy themselves. The fine cast, including Taissa Farmiga (American Horror Story), Malin Ackerman, Adam Devine (Pitch Perfect) and Nina Dobrev (The Vampire Diaries) also contribute significantly to the success of this wonderfully absurd story.

Up until the glorious epilogue, which is again clearly a nod to Halloween II, this film is bursting with original ideas, amusing allusions and blackly humorous slasher elements. If you grew up with Friday the 13th and its ilk, you simply can't get past this homage/parody. Despite some small hangers a genre representative with cult potential, and for that there is a very clear: Absolutely worth seeing!!

Picture + Sound: The image quality of the horror comedy can fully convince. The image sharpness is also with the detail representation on a very high level. Only in very dark scenes, minor quality losses must be accepted here. The coloration is very atmospheric and changes depending on the mood from undercooled to extremely powerful - whereby red comes into its own particularly well here. The audio is in a pleasantly lively Dolby Digital 5.1 mix, which transports the dialogue out of the speakers with good clarity and otherwise impresses with some good surround effects as well as a decent mix of bass. Good!

Extras: Accompanying the main film is an audio commentary really worth listening to, recorded by director Todd Strauss-Schulson with cast members Thomas Middleditch and Taissa Famiga, as well as production designer Katie Byron and cinematographer Elie Smolkin. It's a very lively and also insightful commentary that interested viewers should definitely give a listen to. In addition, there are several extended, removed and alternate scenes (also with optional audio commentary), including the original prologue and ending (approx. 20:49 min.). In addition, the DVD offers a look at five pre-visualization sequences (approx. 5:18 min.), visual effects development (approx. 2:27 min.), and also offers director's notes PDF.

Conclusion: The Final Girls is a wonderful homage to the 80s slasher film and at the same time a successful horror parody, which at some points, however, turned out a bit too tame especially for genre fans. The good-humored actors and some very original ideas Make up for this shortcoming but loose again. If you liked movies like the original Friday the 13th and all its imitators, you will have a lot of fun here. The DVD presents the film in good picture and sound quality. As for the bonus material, it's worth listening in on the lively audio commentary and taking a look at the cut scenes. Overall, there is a clear: Recommendable!