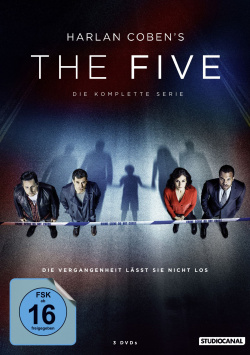 The Five - The Complete Series - DVD

Content: Twenty years ago it was that little Jesse disappeared without a trace. Twenty years in which his parents, his brother and his friends learned to accept the boy's death and to continue living their lives. But then something completely unexpected happens: At a crime scene DNA is found that matches Jesse's DNA. Isn't the boy still alive? And did he become a murderer? His brother Mark (Tom Cullen) and his friends Danny (O-T Fagbenle), Slade (Lee Ingleby) and Pru (Sarah Solemani), who had played in the park with Jesse as children before he disappeared, reunite through the possibility that Jesse might still be alive. But what reveals itself to them in the course of the investigation, which police officer Danny leads with his colleagues, seems to exceed their worst fears…

"The Five" is the first exclusive television production of the 10 times New York Times bestseller author Harlan Coben. For them, the experienced thriller expert has woven a particularly stirring story: How can the DNA of a boy who disappeared twenty years ago without a trace and of whom a convicted serial killer claims to have killed him, appear at the scene of a cruel murder? Coben takes the viewer on a dark journey, not only into the past of the four friends who have been carrying the feeling of guilt around with them for all these years.

The resolution that is delivered in the last episode is at first glance very far-fetched - which results in you really not seeing it coming. But in the end you have a certain logic within you, which may be very constructed, but in the end is coherent. The way there is marked by many twists and wrong tracks, which leads to the fact that the story seems a bit overloaded at some point. In the first three episodes this still works very well, as the thriller story is surprisingly and extremely excitingly implemented.

Then it gets a bit confused and too much threatens to get lost in the numerous subplots and also in some inconsistencies that are not all untangled in the end. Nevertheless: The 10-divider never gets boring. Director Mark Tonderai manages well to tighten the tension screw a little bit every time there are smaller lengths. And the big question about the fate of Jesse and what really happened twenty years ago is ultimately exciting enough to carry the mini-series for long stretches of its life. Altogether "The Five" is not the big throw, but there are just too many weak points. But exciting, well played and atmospherically densely staged thriller entertainment with a quite surprising and round ending is always offered. And for that there is also a clear one: Worth seeing!

image + sound: Picture and sound quality are at a very good level for a current TV production. The overall sharpness is on a quite high level, the color scheme is very atmospheric in a slightly undercooled way and the contrasts are well balanced not only in the bright outdoor shots. The sound is primarily determined by the dialogues, but in some scenes it can certainly score with some decent surround moments. Good.

Extras: On the third disc there are four short featurettes with a total running time of about 20 minutes, in which the author and creator Harlan Coben, as well as the actors talk about the origin, the story, the cliffhangers and the secrets of the individual characters. Not really much, but sometimes quite revealing. Just one tip: Do not watch the extras before the end of the series!

Fazit: "The Five" is an exciting, although dramaturgically somewhat overloaded mini-series. The ten episodes are staged in a thrilling way and well played. On DVD the Crime series presents itself in good picture and sound quality and has a few short documentaries worth seeing on the third disc. All in all a clear one: Recommendable!