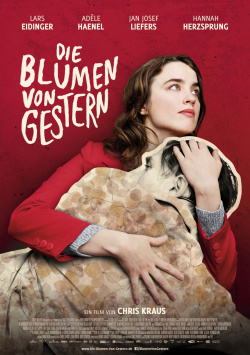 The Flowers of Yesterday

A comedy about coming to terms with the German past? A film with biting humor and depth? Is such a thing even possible? Yes, it can, as Chris Kraus proves quite wonderfully in The Flowers of Yesterday. The film tells the story of Holocaust researcher Totila Blumen (Lars Eidinger), who is absolutely thorn in the flesh that his boss (Jan Josef Liefers) and his colleagues want to turn the upcoming Auschwitz congress into an advertising-financed media event. And he doesn't like it at all that he now has to work with an intern, the Frenchwoman Zazie (Ad&egrave;le Haenel). But all the complaining doesn't help, Totila has to come to terms with the arguably over-excited Zazie in order to get his job done. But as time goes on, the misanthrope and the young Frenchwoman actually grow closer, until they realize that they will soon be forced to come to terms with their own personal pasts.

The Flowers of Yesterday manages a bit of a feat: Chris Kraus has directed a film about coming to terms with a dark chapter in German history that is both profound, but also extremely funny and entertaining. A film that never comes across as flat and silly, even in moments that almost seem like slapstick, and that sets a wonderful counterpart to the usual consternation cinema with its sometimes bitterly wicked dialogues. At the same time, the whole thing is also a story about hope, about reconciliation and about love. A film full of poetry and humour, full of beauty - even in places where you don't really expect it.

Chris Kraus breaks with conventions here and thus creates a real exception in German entertainment cinema. The Flowers of Yesterday shows that a film with a serious subject can also be fun. That neither ambition nor profundity are lost is impressively proven in almost every scene. There are also a few small lengths, but these are easily covered by the strong actors. The ensemble is wonderfully cast, right down to the small supporting roles, and even though Lars Eidinger and the wonderful Ad&egrave;le Haenel are clearly the center of attention, they also give the other actors enough room to fully develop their skills.

Although the epilogue feels a bit contrived, that doesn't change the consistently positive overall impression this film leaves. The magnificently acted story is thought-provoking but full of joie de vivre, hope and wit, so that even in its darker moments it never runs the risk of dragging the mood down. A great film, of whose quality there should be more. Absolutely worth seeing!

Cinema trailer for the movie "The Flowers of Yesterday (Deutschland/Österreich 2016)"
Loading the player ...