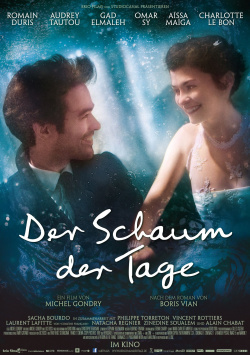 The Froth of Days

Colin (Romain Duris) is a wealthy daydreamer who spends his life doing crazy things, enjoying the arts of his cook and confidant Nicholas (Omar Sy), or indulging his penchant for jazz and casual socializing at parties. His life seems almost perfect. But there is one thing missing from his perfect happiness: true love. This runs into him at the birthday party of a friend's poodle in the form of the beautiful Chlo&eacute; (Audrey Tautou). Between the two it sparks violently and soon wedding is celebrated. Normally at this point follows the sentence: And they lived happily ever after. But fate does not mean well with the lovers. While still on their honeymoon, Chlo&eacutes; very ill, for a water lily grows in her lungs. The doctors don't give her many chances for a full recovery. But Colin is so eager to give up on the great love he has just found.

The Foam of Days is based on the cult French novel of the same name by Boris Vian. Published in 1947, the novel is still considered extremely revolutionary and extremely complex today. Because the love story between the wealthy idler Colin and the seriously ill Chlo&eacute; is filled with many mad ideas and absurdities, the book was long considered unfilmable. But in Michel Gondry, known for his whimsical playfulness, the perfect director has been found to translate the spirit of the book into an appropriate visual language.

Those familiar with Gondry's films Instructions for Dreaming, Forget My Not, or Wacky will know the surreal dream worlds the French filmmaker can conjure up on the screen entirely without the aid of computer effects. And here, too, Gondry makes use of all sorts of practical tricks with a charmingly childlike enthusiasm, using CGI effects only where he feels it's really necessary. Especially in the first fifteen minutes it's just fun to get lost in Gondry's playful fantasy world, to discover the many loving and original, sometimes wonderfully spun details.

It's also noticeable in the actors' acting how much fun they had to be allowed to act in the sets that are just bubbling over with inventiveness. But unfortunately this fun is only partly transferred to the audience. While Gondry was able to perfectly integrate his ideas into the story in earlier films so that the story isn't overwhelmed by them, he didn't really succeed in doing so in The Froth of Days. The viewer is overwhelmed by strange inventions, bizarre dances, talking mice, outlandish vehicles and playful details, so that what has made Gondry's films so charming, endearing and original so far, only seems exhausting and tiring in the long run.

The story is degraded to a minor matter and can hardly unfold its emotional impact. Whether it helps the film that it is missing almost 30 minutes of material in the international version compared to the French version, or whether it hurts it, cannot be judged at this point. But the fact is that after 94 minutes you're glad that the overloaded goings-on don't drag on even more. On the other hand, it's also quite possible that the film would have turned out more coherent and not quite as exhausting with 30 minutes more of plot.

Either way, The Froth of Days is certainly a masterpiece in purely visual terms. But because Gondry fails this time to also emotionally connect the viewer to the story, the showmanship wears off quickly. Less would have been more here. If you are prepared to experience only one rush of images in the typical Gondry style, you can safely indulge in the foam of days. But those who also hope to be carried away by the story will probably leave the cinema less than enchanted. For this there is then also only one: with clear deductions worth seeing!

Cinema trailer for the movie "The Froth of Days (Frankreich/Belgien 2013)"
Loading the player ...