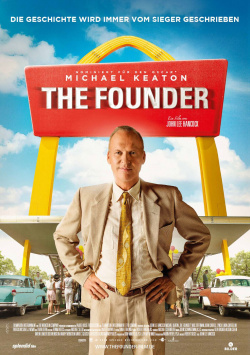 Salesman Ray Kroc (Michael Keaton) is desperate: He's having a hard time selling his milkshake mixers. He travels the country in the early 1950s to find customers. But the big breakthrough just won't come. When a fast-food restaurant in San Bernardino, California, orders six of his mixers, Ray doesn't hesitate and drives straight there to close the deal. When he arrives at the restaurant owned by brothers Mac (John Carroll Lynch) and Dick McDonald (Nick Offerman), he is amazed. Customers are being served by the second and are excited about the burgers they can buy here. Ray smells big business and, with a lot of persuasion and even more persistence, is able to convince the brothers to give him the franchise rights to their concept. This lays the foundation for a fast food empire - but it's still a long and not always pleasant road to great success.

The Founder tells the true story about the founding of the most successful fast food chain in the world. If you're expecting a paean to MacDonalds at this point, though, you're in for a surprise. For Ray Kroc, to whom the fast food restaurants owe their spread and their success, is by no means presented as a shining hero, but as a cunning businessman, to whom profit and success were more important than human ideals or his own family. The fact that you enjoy watching him build an empire is primarily due to Michael Keaton, who does a simply great job of portraying the transformation from desperate salesman to stone-cold millionaire. He plays Kroc as a conscienceless phony who can be extremely charming until he gets what he wants, only to then show a mercilessly cold and unfriendly side.

Keaton succeeds in bringing some interesting facets to the character. Ray Kroc isn't a one-dimensional creep, but a fighter who took so long to get to the top that there's no way he wants to leave there - no matter the cost. Aside from the fact that it's just interesting to see what the roots of a company like MacDonalds look like, it's the transformation Ray Kroc undergoes over the course of the story that makes this film so engaging. Director John Lee Hancock had last taken a close look at another billion-dollar company founder in Walt Disney in Saving Mr. Banks. However, Disney came off much better than Ray Kroc simply due to the fact that he was played by Tom Hanks, arguably the most likeable man on the planet. What both films have in common, though, is that Hancock tries to debunk at least a little bit of a myth and shows the very human, not always pretty side behind an empire like MacDonalds or Disney.

The Founder tells its story engagingly, but never loses sight of the entertainment value. So every now and then some humor, at times interspersed with a good dose of cynicism, comes into play. This also helps the movie to get over some minor lengths, which surely would have been much more serious if the whole thing would have been realized as a pure drama without a hint of irony and lightness. As it is, however, the whole thing is a very entertaining success story that doesn't spare its downsides. Supported by a great leading actor and an overall very convincing ensemble, there can only be one conclusion for it in the end: An extremely tasty menu, which has more than earned an Absolutely worth seeing!