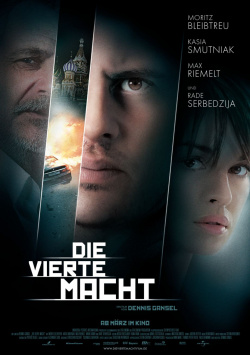 In Moscow, Berlin-based scene journalist Paul Jensen (Moritz Bleibtreu) is tasked with giving a Russian tabloid magazine a new lease of life. At first, Paul thoroughly enjoys working for his old mentor Alexei Onjegin (Rade Serbedzija) and becomes infatuated with Moscow's nightlife. But when he meets the attractive Katya (Kasia Smutniak), his new life spirals completely out of control. Not only does he fall in love with the young woman, but he also allows himself to be persuaded to write a politically motivated obituary, which could put not only him as the author, but the entire magazine in danger. When Katja is killed in a bombing a short time later, Paul is arrested for aiding and abetting terrorism and sent to prison. Here he has to go through hell in the truest sense of the word, but has no idea that the real nightmare only begins when he is released again and his return trip to Germany is approved...

The Fourth Force is the latest film from The Wave director Dennis Gansel, who last tried to make the German vampire film respectable again with Wir sind die Nacht. So now the filmmaker ventures into a multi-layered political thriller and presents a similar result to his vampire film: the intentions are high, the visuals are very good, but in terms of content the whole thing is a little too overloaded and bloodless to be truly captivating.

No question, Gansel succeeds very well in building an atmosphere dominated by paranoia and omnipresent threat, which he underpins with some extremely strong scenes. Whether it's a huge explosion right at the beginning of the film, the bombing in the Moscow subway, or the oppressive atmosphere in the prison, these are all first-rate aspects of a very ambitious political thriller. With really good performances from the actors, no matter if Moritz Bleibtreu, Max Riemelt or Kasia Smutniak, Gansel always manages to keep the viewer hooked to the action.

But unfortunately, and this is the film's major weakness, Gansel loosens these bonds too often by simply bogging down the plot too much and getting lost in apparent trivialities. The fact that there are no side issues in the story itself doesn't really matter, because by the time the viewer realizes how the individual parts of the story are connected, even diehard thriller fans are likely to have lost interest. The Fourth Force is far from being a bad movie. There are just too many of the ingredients right for that. But there just remains the uneasy feeling at the end, as if Gansel has tried a little too overambitiously to pack too much into the story, so that the end result seems overloaded, overdone and thus also only little comprehensible to the viewer.

Atmospheric images, good actors and some very well implemented moments of tension but at least ensure that the film at the end of the viewer is not completely bored from the cinema and therefore lovers of with a little action added political thrillers can still be recommended.

Cinema trailer for the movie "The Fourth Power (Deutschland 2011)"
Loading the player ...