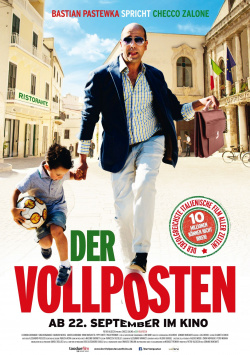 Checco (Checco Zalone) has what many can only dream of a permanent position as a civil servant in the state administration for hunting and fishing. He still lives with his parents and is served from top to bottom by his mum and his attractive permanent girlfriend. But the relaxed life of luxury is about to come to an end when the government decides to reform the public administration. Now Checco has a choice: either he accepts his resignation and the severance pay that comes with it, or he must accept a transfer. Unwilling to give up his permanent position, he agrees to the transfer - much to the displeasure of civil servant Sironi (Sonia Bergamasco), who wants to meet her quota at any cost. And to do that, she has to get Checco to accept the resignation. That just leaves the question of which of the two has the longer breath.

The comedy The Full Post is one of the most successful films of all time in its native Italy, with over 10 million viewers. Even blockbusters like the recent Star Wars flick were able to put Checco's fight for tenure in its place. The very self-deprecating treatment of officialdom, stereotypes and clichés simply struck a chord with Italian audiences. Of course, one should not assume that the film will be as successful in Germany. For that, too many gags allude to typical Italian peculiarities, which are difficult to transfer. However, the makers of the German dubbed version have made every effort to ensure that as many gags as possible also work in this country.

This succeeds on the one hand through the way Bastian Pastewka dubs Checco. Of course, one recognizes Pastewka's very distinctive voice immediately. Nevertheless, he succeeds in giving the vain official a character all of his own, which perfectly matches the spirit of the original. But also the dialogues have been translated really well into German, which is a more than respectable achievement just because of the speed in which they are sometimes spoken. The question now is whether the effort that went into the dubbing was worth it? The answer to this question is a hesitant yes!

Because the really good, sometimes very subversive gags and those that come off as flat are more or less in balance. There are moments when The Full Post is quite a lot of fun and really one of the funniest Italian comedies in a long, long time. Then again, there are scenes where the film is just plain stupid. True, the good moments are strong enough that the whole thing never really goes bad. Still, the obvious potential of the comedy is too often wasted on very simple-minded corny jokes, which ultimately dulls the overall positive impression a bit.

However, even if one can't quite comprehend the huge enthusiasm the film has generated in Italy over here, the bottom line is that Der Vollposten offers plenty of good laughs and enough fun to justify a visit to the cinema. And when a country takes its politics, its foibles and its associated clichés for a ride in such a charming way, even a few bland gags are gladly forgiven. Worth seeing