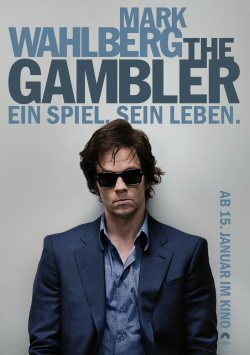 Literature professor Jim Bennett (Mark Wahlberg) could actually lead a fairly carefree life, were it not for his penchant for illegal gambling. No matter how much money he wins in the process, he just can't get enough. Time and time again he pushes his luck so that he is now not only in debt to his mother (Jessica Lange), but also to Mister Lee (Alvin Ing), the operator of an illegal gambling ring, and to the gangster Neville (Michael Kenneth Williams). To pay off his debts, he borrows money from loan shark Frank (John Goodman) - not a good idea for a notorious gambler like Jim. Soon he has only one option left to get out of trouble - but to do so he has to betray his ideals and put his own life on the line. And those stakes may be too high even for him.

The Gambler is the remake of the 1974 crime drama Gamblers Without Scruples, and director Rupert Wyatt (Planet of the Apes: Prevolution) has broken far enough from the original's plot to step out of its shadow and be considered a work in its own right. Craft-wise, Wyatt's drama, peppered with plenty of cynical humor and light thriller elements, is absolutely successful. The actors also deliver convincing performances throughout, even if you don't really want to believe Mark Wahlberg as the university professor. However, the film has some quite strong moments to offer, especially on the acting level, which show what entertainment value the story could actually offer.

However, the successful aspects are also countered by some problematic aspects. For instance, the fact that there are actually no real sympathetic characters in the entire story - aside from Jim's student and affair Amy (Brie Larson), perhaps - could have a negative impact on many viewers. After all, why should anyone be interested in the fate of a man who so carelessly throws his life away and drags everyone around him into what should be his own personal downward spiral? Since Jim does this quite deliberately, he simply fails as an identification figure for the audience. He's not an anti-hero either, but simply a self-destructive egoist who hides his real problems behind an indifferent and put-upon cool facade. Spending money to watch such a person for almost two hours is really hard to recommend - as well acted as the whole thing may be.

The other problem is that every now and then the script gets lost in too long dialogues, or rather sprawling monologues, which on closer inspection do not advance the plot in any way and in the end are not as profound as they pretend to be. In principle, it's Jim's heatedly delivered monologues that stand in for the entire film: they're rousing in a way, but surprisingly trivial in the end. The top-notch camerawork, the good actors, the touch of biting humor - all of these create a nice glow, but it's not powerful enough to disguise the boredom lurking behind it and the meaninglessness of the story throughout the film's runtime. And so only die-hard Mark Wahlberg fans or those viewers who find broadcasts of poker games on TV tremendously exciting will probably enjoy this drama. Therefore: only conditionally worth seeing!