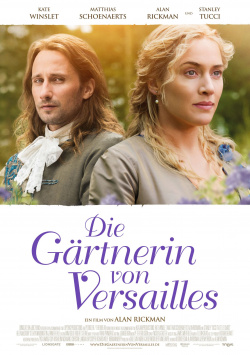 The Gardener of Versailles

France at the end of the 17th century: Louis XIV (Alan Rickman) wants the park for his new palace at Versailles to eclipse anything that has gone before. His chief garden architect André Le Nôtre (Matthias Schoenaerts) is to hire the best landscape gardener in the country for the job. But his choice falls on, of all people, the very unconventional Sabine De Barra (Kate Winslet), who is to build a baroque garden for the park. But this job turns out to be more of a curse than a blessing for the single widow. For not only does she face the envy and hostility of her male colleagues. Her burgeoning feelings for her client could also become a serious problem. For André Le Nôtre is married, and his jealous wife is doing everything she can to sabotage Sabine's work...

18 years after his debut The Winter Guest, actor Alan Rickman now delivers his second feature as director with The Gardener of Versailles. Opulently equipped and with a first-class cast, the film is first and foremost a feast for the eyes. Shot entirely in England, Rickman's version of Versailles takes some historical liberties with both the characters and the landscape architecture. The character of Sabine De Barra is also a purely fictional character, which is why even the implied liaison with André Le Nôtre is a pure invention of the screenwriters. So anyone expecting an absolutely authentic look at the court and garden of Louis XIV will certainly be disappointed by this visually stunning gardening.

But those who can accept that the story is set in a real historical context, but is overall fiction, could be won over by the film's strengths, which are definitely present, and enjoy two relaxed, entertaining hours. One of these strengths is undoubtedly the actors. While Matthias Schoenaerts (The Taste of Rust and Bone) seems a bit colorless, Kate Winslet can make up for this shortcoming with her usual strong acting. Wonderful as always, but unfortunately far too short is the appearance of Stanley Tucci as the Duke of Orléans. And Alan Rickman himself is also beyond reproach with his portrayal of the Sun King, laced with light irony. Embedded in the wonderful imagery, the actors ensure that the production is engaging even when the script actually gets bogged down in somewhat plodding moments.

This is actually also the film's only real annoying weakness. While in some scenes the dialogue has a lot of bite and the plot is coherently moved along, other moments plod along in a far too inconsequential and long-winded manner. This results in a somewhat unbalanced overall impression that settles somewhere between quite wonderful and cultivated boredom. Still, if you like romantic costume dramas and like to get lost in opulent pictures, you can't really go wrong with this visit to Versailles. Not a masterpiece, but still well worth seeing with minor drawbacks!

Cinema trailer for the movie "The Gardener of Versailles (Großbritannien 2014)"
Loading the player ...