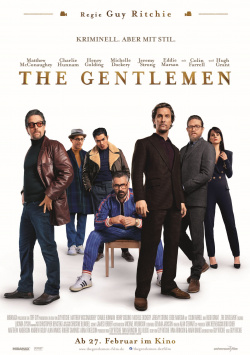 It has taken years for American Mickey Pearson (Matthew McConaughey) to build his multi-million dollar marijuana empire in London. But now the time has come for him to get out of the business and live a life of legality with his wife Rosalind (Michelle Dockery). In billionaire Matthew Berger (Jeremy Strong), the perfect buyer for the ingeniously hidden hemp plantations seems to have been found. But shortly before the multi-million dollar deal can be closed, one of the plantations is raided. In addition, triad upstart Dry Eye (Henry Golding) also expresses interest in the business. As the methods get dirtier and blood flows, Mickey's right-hand man Ray (Charlie Hunnam) desperately tries to keep the situation under control for his boss. But that soon seems impossible.

After his foray into family-friendly Disney territory with the hugely successful Aladdin remake, Guy Ritchie returns to his roots with the gangster comedy The Gentlemen. The bitterly wicked, top-class cast flick clearly exudes the flair of Snatch - Pigs and Diamonds, even if it never quite reaches its class. Nevertheless: With a lot of partly deep black humor, a little bit of brutality and a lot of wonderfully cynical dialogues, Ritchie shows that he can still do what once made him a cult director. His new one may not be his best film, but at least it's a real Guy Ritchie again. And that's just a lot of fun.

I generally agree that a lot of dubs are really good. While I also often prefer the original version, I would never engage in synchro bashing. We simply have too many good voice actors and actresses for that. But even if the German language version of The Gentlemen might be very good (which I can't judge, as I've only seen the OV), I can only advise everyone who has the chance to do so, to watch the English language version. Because alone what Hugh Grant contributes to the film with his style of comedy, simply can't be transferred into another language. This is then inevitably lost, which is just a shame.

You can tell especially Grant what fun he had playing such an eccentric role. But also Colin Farrell (just great), Matthew McConaughey (comes a little too short, but is also great again) or the otherwise rather on the role of the Schnuckelchens subscribed Henry Golding (Last Christmas) deliver absolutely wonderful performances, through which the film extremely gains in class. Admittedly, the wheel is not reinvented here. At its core, The Gentlemen is a very conventional gangster film, but its humor and some very original ideas make it very refreshing. Perfect entertainment for anyone who likes Ritchie's early films. For the cast alone, here's a more than deserved: absolutely worth seeing!

Cinema trailer for the movie "The Gentlemen (USA 2020)"
Loading the player ...