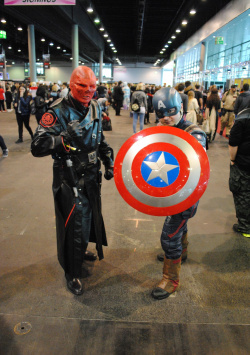 The German ComicCon in Frankfurt - An Experience Report

I decided to write about the first German ComicCon in Frankfurt not from a journalistically distanced point of view, but from the personal perspective of an avowed nerd, who has already followed two such events in Dortmund and of course also the big Star Trek Convention in Frankfurt three years ago with enthusiasm. As such, I was of course very happy that the German ComicCon also came to Frankfurt. In the last few months I have followed with great interest which guests from film and television have announced their coming and after announcing the programme I planned the two days at the Con with much anticipation.

I have to be honest: When I arrived at the fair with my buddy, there was a little disappointment at first: In contrast to Dortmund, where the hustle and bustle stretched over several halls, Frankfurt had a much smaller range with only one hall. There were also much less originally disguised visitors, which was also a bit of a pity, as the many costumes, which were sometimes very lovingly and elaborately designed, are partly responsible for the fact that such events have a very special charm. And finally it was noticed negatively that the Main Stage, which was to be found in Dortmund in a small hall of its own, was not separated here separately, which is why the panels were accompanied by a constantly present background noise.

After this first disillusionment the enthusiasm returned quite fast, when the star guests came together for a group photo, in order to sit down afterwards at their places at the autograph tables. Here we as the press had the opportunity to take photos and in some cases to talk briefly. And there were quickly the first very positive surprises. Because without exception the actresses and actors were extremely accessible, friendly and sometimes pleasantly down-to-earth. This also led to the fact that the panels on the Main Stage were sometimes extremely entertaining.

Here were three big highlights for me: On the one hand TJ Thyne, known from the series "Bones", who told enthusiastically about what he already did in Frankfurt and how much he enjoys his time in Germany. Thyne answered his fans' questions with a lot of charm and humour, which made his 20 minutes on stage fly by. The second highlight was the performance of Natalia Tena and Daniel Portman from "Game of Thrones". Portman, in particular, made for a lot of laughs with his answers and proved to be the perfect showman for such an event.

But my absolute highlight was the four-panel of the series "Gotham", in which besides Robin Lord Taylor and Erin Richards also Sean Pertwee and Drew Powell took part. Not only was the chemistry between the fours just perfect. At the latest, when Powell brought a fan to his lap, it became clear how much they enjoyed the direct exchange with the fans and that they didn't just put on a big grin because they were paid for it. By the way, I also noticed that when I could exchange a few words at the autograph table with Robin Lord Taylor, who had even tried extremely hard to exchange a few words of German with his fans.

On the smaller comic stage there were also some nice gigs, like the one of the wonderful, because always unpredictable Sylvester McCoy ("Der Hobbit", "Doctor Who"), the very sympathetic gig of Alicia Witt ("Walking Dead", "Dark Legends", "Dune"), who had a gig as a musician on Sunday evening in Frankfurt, as well as the comic talk of Martin Perscheid. Some nice photo points, a cosplay contest, cosplay speed dating, indoor bungee jumping, a retro area with old computer games and fan areas were also offered. More for younger visitors there was an area, which admittedly almost completely passed me by. At the Influencer Stage, guests appeared who had become known in particular through social media platforms such as YouTube or Instagram. And if you have noticed the enthusiasm with which they were welcomed by their followers, it was probably a good decision of the organizers to integrate this area into the German ComicCon for the first time.

After two days with about 19,000 visitors, the first German ComicCon in Frankfurt was a satisfying success despite some points of criticism. The guests were in a good mood and offered their fans some unforgettable moments. And in the end, it's all that matters. For me it's quite clear: When the German ComicCon 2018 comes back to Frankfurt, I'll be there again!

If you want to know more or visit one of the cons in other cities, you'll find more information here: Http://www.germancomiccon.com/de/