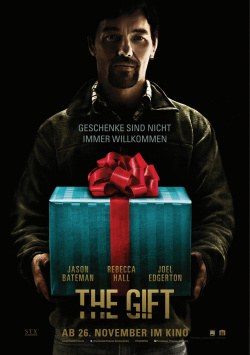 When Simon (Jason Bateman) and Robyn (Rebecca Hall) move into their new house, their lives finally seem to be heading towards rosy times again after a tragic event. A lucrative promotion awaits Simon and Robyn makes a fast friend in her new neighbor Lucy (Allison Tolman). But a chance encounter with Simon's old classmate Gordo (Joel Edgerton) changes everything. At first, Simon can't remember the unassuming man at all. But then he remembers that Gordo was a total loser at school who he liked to tease. He thinks nothing of it when they receive a welcome gift from Gordo. But when he keeps showing up uninvited and leaving more gifts, Simon's initial politeness gives way to a clear announcement that Gordo should stay away from him and his wife. But behind Gordo's strange behavior lies a dark secret that could completely destroy the idyll Simon is trying to build here with Robyn.

The Gift is the directorial debut of actor Joel Edgerton, who also stars here, wrote the screenplay and was also involved in the production. Whenever an actor dabbles in so many other posts as well, such a self-realization trip often goes badly awry. Fortunately, this revenge drama is one of the rare cases where it works really well - with minor drawbacks. The story is suspenseful and blurs the lines between good and evil in surprising ways. There are some predictable plot elements, to be sure. But the way Edgerton reverses the victim-perpetrator roles is quite surprising and effective.

However, the film largely avoids the usual shock effects. Rather, it allows its destructive force to break very slowly and subtly upon the lives of Simon and Robyn. This may well come across as a little tough and drawn out to some viewers. But if you let yourself get wrapped up in the ominous and gloomy atmosphere that dominates the film, you'll get some really good suspense cinema here. Edgerton not only proves to have a good hand behind the camera. His acting as the eccentric Gordo is also absolutely convincing. From his first appearance the man comes across as very unpleasant, but Edgerton never lets him degenerate into a one-dimensional weirdo. And that pays off extremely effectively towards the end of the film.

Jason Bateman is also convincing with a multi-faceted performance that pleasantly stands out from the comedic roles you're usually familiar with him from. How he manages to so believably vary the emotions you feel towards Simon as an audience member is a really good performance. In contrast, Rebecca Hall remains a bit pale, though that may also be due to her somewhat thankless role. Still, there's really nothing to complain about in terms of acting. It's a shame that a few unnecessary lengths prevent The Gift from becoming a real cult thriller. As a viewer, you have to struggle through a few moments too much to be completely enthralled. Although it pays off in the end to stay on the ball. But the positive overall impression gets a bit clouded by that. But if you like thrilling thriller-dramas of the quieter kind, you'll be well served here. Therefore, despite minor drawbacks, there is still a: Absolutely worth seeing!