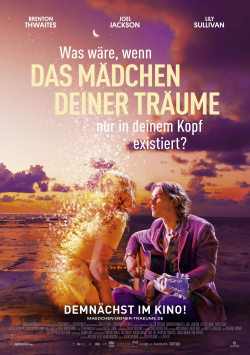 The Girl of Your Dreams

The musician Devon (Brenton Thwaites) suffers from schizophrenia. He sees people who don't exist and hears voices in his head. He doesn't want to go back to the hospital, although he is definitely a danger to himself in critical situations. But then Devon meets Lucy (Lily Sullivan) - and his life finally seems to be getting good. He falls head over heels in love with the girl, with whom he spends a few wonderful hours. But then Lucy disappears without a trace, leaving him with only a brief message: "Meet me in Sydney"! For Devon the matter is clear: He makes his way across Australia to meet the girl of his dreams. His brother Nick (Joel Jackson), on the other hand, doesn't believe Lucy actually exists. Fearing for Devon, he follows his younger brother on his turbulent journey to Sydney...

"The Girl of Your Dreams" is, at last, a rather unusual and surprising romance that boasts original plot twists and likeable characters. Brenton Thwaites is utterly convincing as a musician in love with a mental disorder. One wishes with all one's heart for him that Lucy really exists - even if one tends to agree more with Nick's assumption that Devon has only imagined the girl. You feel sorry for him when he has one of his fits and suddenly finds himself pursued by cruel nurses.

Director Luke Eve is very good at expressing classic romance and human drama in engaging images. And he actually manages to surprise a bit with the resolution of the story, which is really not a given given given the mass of romance films in recent years. There are only small points deductions in the B grade: The plot line around Nick and his heavily pregnant wife is not unimportant for the story, but it is told a bit too extended. A few tightenings here and there would have certainly done the narrative flow some good.

Admit: The wheel is not reinvented here, to be sure. Still, "The Girl of Your Dreams"feels refreshing and pleasantly different. The tone of Eve's production seems a bit indecisive between light comedy and dark drama in a few scenes. But in the end, the overall picture is absolutely coherent. A really nice film for the heart, which more than deserves a "Seeable"!

Cinema trailer for the movie "The Girl of Your Dreams (Australien 2020)"
Loading the player ...