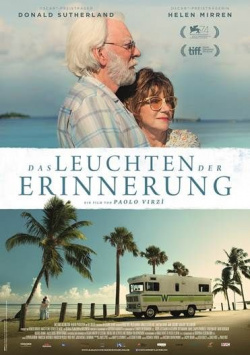 The Glow of Memory

Ella (Helen Mirren) and John (Donald Sutherland) have been married for many years. Together they experienced a lot, raised two children and went through the ups and downs of a marriage together. But now they are old and their common path is coming to an end. As he slowly but surely loses his memories to retired teacher John, Helen's body fights a bitter battle against cancer. But the couple doesn't want to let the twilight years be dominated by forgetting and visits to the doctor. They set off in their old motorhome on a final journey towards Key West, where they want to visit the Hemingway house. It is a journey into the unknown, which both want to master with their unconquerable courage and their love. But even now life is still holding a few surprises in store for them…

With the novel adaptation "Das Leuchten der Erinnerung" the celebrated director Paolo Virzì ("The Sweet Greed") delivers his first English-language film. It's a very nice story at its core, carried by an outstanding actor-duo, who can't really unfold the emotional power, whose potential can be felt again and again. That's partly because of the script. Here one notices that the dialogues were not written by native speakers. They sound - at least in the English original version - simply too artificial, which is then transferred back to the game of the actors. Helen Mirren and Donald Sutherland can still largely compensate for this. The supporting actors, on the other hand, are less successful.

But Virzìs staging is also problematic in this case. His style and the story just don't really fit together. There are too many moments of unnecessary slowness in which the action is not really driven forward. This is especially noticeable when the interspersed lightness disappears more and more and gives way to the heaviness of the fate of Ella and John. The fact that the dramaturgy here is extended by a late marriage crisis seems arguably constructed and deprives the story of much of its credibility.

No question, "The Glow of Memory" has its moments - both visually, when the film shows some rarely used sides of America, as well as acting, when Helen Mirren and Donald Sutherland are allowed to reach top form. But all in all - and that's really a shame with such a topic - the staging remains too emotionally distanced to actually be able to grab the audience. A film that leaves its audience depressed at the end - and not just because of the story. Therefore there is a "worth seeing" here just so and also only with clear cutbacks.

Cinema trailer for the movie "The Glow of Memory (Italien/USA 2017)"
Loading the player ...