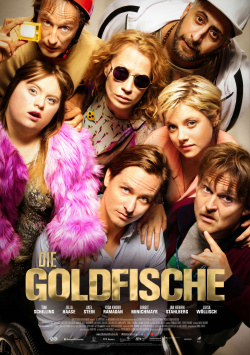 Gone with life in the fast lane: after a car accident, young portfolio manager Oliver (Tom Schilling) is confined to a wheelchair. But Oliver doesn't want to give up that easily. He wants to get back to work as soon as possible. If only the tiresome rehab were over. When he learns that an illegal account in Switzerland will land him in big trouble and, more importantly, bankruptcy, Oliver makes a decision: he sponsors a camel-riding trip to Switzerland for the "Goldfish Group," a quirky group of disabled people. While caregiver Laura (Jella Hasse) rides the camels with blind Magda (Birgit Minichmayr), autistic Rainman (Axel Stein) and Michi (Jan Henrik Stahlberg), and Franzi (Luisa Wöllisch), a self-confident girl with Down syndrome, Oliver and caretaker Eddy (Kida Khodr Ramadan) want to keep the money safe. But this inherently foolproof plan goes badly awry when Eddy decides to retire early with Oliver's money.

The Goldfish attempts a difficult balancing act: a biting comedy about a group of people with disabilities where you laugh not at them, but with them. It's a very fine line, one that director Alireza Golafshan manages to walk convincingly, at least in parts. There are many moments when he tells the story with a pleasant bite. He deliberately refrains from handling the characters with kid gloves or - even worse - pitying them. And it is precisely because of this that he draws authentic, likeable characters that you enjoy spending time with. Yes, you actually laugh with them and not at them.

This is equally to the credit of the director and the actors. While the script also contributes a great deal, it also simultaneously contains some of the film's clearest weaknesses. For as amusing and biting as some of the dialogue is, other gags fall flat. In addition, some moments are very predictable, which reduces the entertainment value a little bit. It would have been desirable if there had been a little more courage to satirical malice and biting humor.

After all: Brav and adapted The Goldfish are fortunately only relatively rare. Overall, Alireza Golafshan has succeeded in making an entertaining, turbulent comedy with some really good ideas and delightful gags, which are charmingly transported to the screen by the good ensemble. Not quite a big hit, but definitely good entertainment that can be recommended to lovers of German comedies. Worth seeing!

Cinema trailer for the movie "The Goldfish (Deutschland 2019)"
Loading the player ...