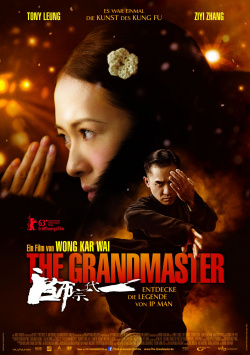 South China in 1936: Kungfu Grandmaster Gong Bao-Sen (Wang Quing-Xiang) has decided to step down as the leader of North China's fighting schools. As tradition dictates, Gong must now face one last fight against the best fighter in South China. When he is beaten in the process by IP Man (Tony Leung) using his Wing Chun technique, Gong's daughter Gong Er (Zhang Zi-Yi) feels her father's honor has been violated. She challenges IP Man to a duel in which she hopes to restore the family honor. During the fight, not only great respect but also intense affection develops between the two. But before anything more can come of it, the two are separated by the outbreak of war with Japan. While IP Man loses all his belongings due to the invasion of the Japanese and suddenly has to fight for his existence without means, Gong Er seeks revenge after the murder of her father by his former master student. It is not until 1952 that IP Man and Gong Er cross paths again, after many hard years that have left their mark on both of them.

Director Wong Kar-Wai (In the Mood for Love, My Blueberry Nights) has made a name for himself worldwide as an exceptional director of Hong Kong cinema through his artful style of staging. Admittedly, his very special signature is often a bit too unwieldy for a broad mainstream audience, especially since he prefers to let the images do the talking rather than his actors. But viewers who have once been caught by Wong Kar-Wai's rush of images will find it difficult to escape its fascination. His tenth feature film The Grandmaster, in which the filmmaker invested six years of preparation and three years of production, is once again primarily a feast for the eyes. The fight sequences, for which renowned action choreographer Yuen Woo-Ping (Tiger & Dragon, Matrix) is responsible, are simply spectacular and will not only bring martial arts fans into raptures.

The true story of IP Man, the later kungfu teacher of the legendary Bruce Lee, and Gong Er is in itself also very interesting from a historical as well as emotional point of view. And Wong Kar-Wai's effort to pay tribute to his country's various martial arts techniques also adds a certain charm to the film. Unfortunately, the overall dramaturgical execution is far too brittle and, measured against the abundance of set pieces, too superficial to inspire in the same way as the film's visual style. The dialogue is occasionally unintentionally funny (The noodle pockets are cooked, but you're not allowed to eat with them), which can only be blamed on the dubbing to a certain extent. Finally, the characters are surprisingly lifeless in the scenes where they are not allowed to fight, which is why the more dramatic moments lack emotional impact. Because of all these factors, the film rarely succeeds in truly sweeping you along, despite its strong visual language.

The Grandmaster is Wong Kar-Wai's most commercial and also most successful film to date. This is certainly not only due to the visual grandeur of the work. Nevertheless, this lesson in Chinese martial arts leaves a very ambivalent overall impression, as there is little emotional depth behind the beautiful cover, in which probably only connoisseurs and great admirers of the director will also recognize a lot of magic and beauty. For everyone else, however, the film unfortunately doesn't offer much more than two hours of cultivated boredom with high show value. For an unreservedly worth seeing this is too little. But: who wants to see the film, should not wait for the home theater version, despite its weaknesses, because the images that cinematographer Philippe Le Sourd has captured, simply belong to the big screen!

Cinema trailer for the movie "The Grandmaster (Hongkong/China/Frankreich 2012)"
Loading the player ...