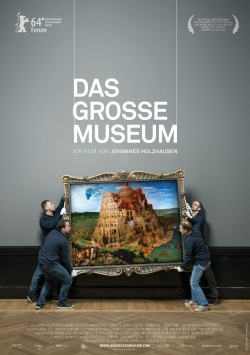 The Kunsthistorisches Museum in Vienna is undoubtedly one of the most important museums in the world. The Kunstkammer is an important part of this museum. However, for structural and technical reasons, the collection had to be temporarily closed in 2002. After a thorough renovation and costly reconstruction, the 20 themed rooms of the new Kunstkammer were finally reopened in March 2013. Preparations for this event played an important role in all aspects of the museum's everyday life for a long time. Filmmaker Johannes Holzhausen was given the opportunity to look behind the scenes of the Kunsthistorisches Museum over a period of more than two years and in particular to capture on camera the work in the Kunstkammer up to its reopening. The result is the documentary Das grosse Museum, which, apart from a few minor lengths and minimal criticisms, has become an extremely exciting and entertaining affair, and not just for art lovers.

However, Holzhausen only allows his camera to observe. There is no explanatory off-camera commentary, no interviews and no accompanying music. His film is a very direct, unadulterated observation of everyday life that also pays tribute to the work of people that museum visitors don't normally get to see. The camera is present when the museum management discusses the design of advertising posters, when high-ranking visitors from other museums are guided through the hallowed halls, when restorers work in secret or craftsmen spruce up the Kunstkammer. The viewer is present at meetings, travels through long corridors of the archives or looks over the shoulder of a collection manager about to retire during his last days at the museum.

The whole thing is also always presented by Holzhausen with a slightly ironic wink, which is why the completely unexcitingly staged documentary never comes across as too dry, but always very entertaining. The fact that he never interferes with the events by asking questions or commenting on what is shown to the viewer is on the one hand what makes the documentary so appealing, but on the other hand it also creates a certain distance to the viewer. It is not until the end credits that the viewer learns the names and functions of the people in whose everyday working lives he has participated over the past 100 minutes. Here it would have been nice if the protagonists had been introduced with the help of short inserts right at the beginning and not only at the end of the film. Because it is not always really clear in which working area of the museum you are at the moment.

Even if this lacks a certain level of information, which would certainly have been very interesting for many viewers, The Great Museum lets you participate nicely in the everyday coexistence of art and bureaucracy, of passion and routine. This is extremely interesting, in places downright surprising and often pleasantly amusing. A beautiful film with little hangs, which in its best moments is a little work of art itself. If you've ever wanted to know how many people are responsible for exhibitions from conception to opening, if you simply want to experience the day-to-day work behind the artworks, you should definitely not miss this entertaining documentary. Worth seeing

Cinema trailer for the movie "The Great Museum (Österreich 2014)"
Loading the player ...