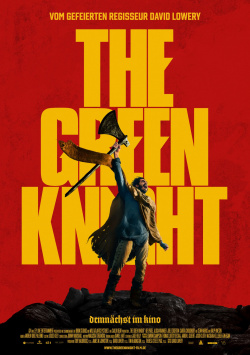 "The Green Knight" is in many ways an interesting reimagining of the 14th-century medieval chivalric romance "Sir Gawain and the Green Knight". The original 2,500-word poem, set in stave rhyme, was written in the British Isles in the 14th century by an unknown author and has fascinated readers ever since. Director David Lowery has created a surreal rush of imagery from the poem that can be interpreted in many ways. Most obviously, the conflict between civilization and nature is symbolized in the battle between Gawain and the Green Knight. But there is much more to the film.

To realize this, however, the production does not make it easy. Lowery tells the story very slowly, giving the truly special atmosphere of his imagery an almost hypnotic pull. Again and again, you catch yourself thinking: "What am I looking at here right now?" or "What was the director smoking to come up with such ideas?". The whole thing is crazy, confused, and disturbing - and at the same time fascinating, beautiful, and delightfully bizarre. But in many moments this doesn't open up directly, so that one is inclined to evaluate the film rather negatively. But little by little it becomes clear: The interplay of visual realization, sound design and music as well as the essence of the story won't let you go so quickly. Again and again, isolated images come back to mind, which thus unfold their real power in the aftermath.

"The Green Knight" is not an easy film. But it is special in the best sense of the word. Those expecting a grand fantasy epic may be disappointed. If, on the other hand, you want to be carried by a mystical flow of images through a challenging story, you've come to the right place. A work that really goes its own way and creates images that are rarely seen in cinema. For this there is clearly a: worth seeing - even if it is a challenge!

Cinema trailer for the movie "The Green Knight (USA / Irland 2020)"
Loading the player ...