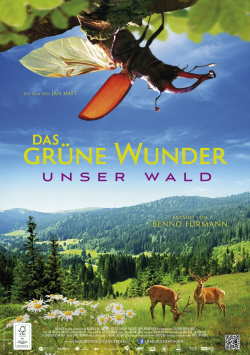 The Green Wonder - Our Forest

In Germany, about 30 percent of the national territory is forested. That is over 10,000,000 hectares of deciduous and coniferous forests. A very widespread habitat, therefore, about which, however, especially among city dwellers is quite little known. Nature filmmaker Jan Haft now wants to change this with his wonderful documentary The Green Miracle - Our Forest. Between 2005 and 2011, he and his team captured 250 hours of film footage at 70 locations in Germany, Austria and Denmark, from which he edited an almost 90-minute journey through the forest habitat. From the tops of the trees to the depths of the ground, plants and animals were observed with various cameras and filmed from camouflage tents or hot air balloons. Homemade camera sleds on cable cars and rail systems have provided footage that offers viewers truly unique images in time-lapse, normal speed, or slow motion.

Whether ants protecting their burrow from predators with the help of deliberately sprayed acid, fox cubs exploring their surroundings, bumblebees driving mice out of their burrows to settle there themselves , deer defending their territory or stag beetles becoming food for slime moulds after losing a duel, all this and much more is presented in a very entertaining, gripping way with great attention to detail and also a little humour. Benno Fürmann leads as a narrator through the events. Even though many of the images would not have needed any accompanying commentary at all, Fürmann's voice never comes across as distracting or annoying.

The film, however, only provides a general insight into the forest habitat. There is no specific information, such as which animals are found in which region of Germany or Europe, which plants tend to grow in deciduous forests and which primarily in coniferous forests, or whether there are significant regional differences in the forest and its inhabitants within Germany. Although there would certainly have been some interesting information to impart here, the rather general and unspecific style of the documentary does not have a negative effect. On the contrary. Because the fact that the whole thing seems less like a sober educational film, but rather like an informative and surprising walk in the countryside, the entertainment value of the nature documentary is increased enormously.

And this is important insofar as the film is already threatened with the fate of drowning in the mass of the many animal and nature documentaries of recent times. Because even if there are always high-quality and simply wonderful films among them, the interest of the audience in works of this genre is unfortunately decreasing more and more. We can only hope that The Green Miracle - Our Forest will once again be able to attract a larger audience to the cinemas. Because the enormous amount of work that went into the project, the wonderful realization and the fascinating images make it more than recommendable to watch this film on a big screen. It's best to plan an extended walk in the woods right after your visit to the cinema. Because after watching this documentary, you will definitely see the local flora with completely new eyes and perceive it much more consciously. And for this there is then also a deserved: absolutely worth seeing!

Cinema trailer for the movie "The Green Wonder - Our Forest (Deutschland 2012)"
Loading the player ...