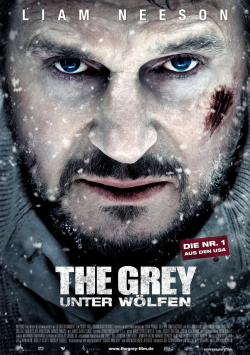 After director Joe Carnahan had delivered with his film version of the cult series The A-Team an action film of the rather fun variety, he now sends its main actor Liam Neeson again in a tough adventure. However, The Grey is much darker and more exciting than the adventures of the A-Team. In the survival thriller, Neeson plays John Ottway, a loner robbed of any will to live after the death of his wife, who works at an oil refinery in the middle of the harsh Alaskan wilderness. As he flies back home with the rest of his crew after a shift change, their plane is caught in a severe storm that causes the plane to crash. Eight survivors must now fight hunger and cold together in hopes of finding a way back to civilization. But then John discovers that they have crashed in the middle of a wolf pack's hunting ground. And the hungry animals have already begun to defend their territory...

It may seem at first that The Grey is a solid action thriller. That is certainly the case in parts of the film. The wolf attacks, although the wolves themselves are only partially convincing, are very effective and at times extremely bloody staged. Also, other moments of the men's fight for survival tug at the nerves of the audience. In between, however, there are numerous much quieter moments in which the men ponder their lives in extended conversations. Through this, Carnahan does manage to give some of the characters a certain depth that you rarely find in this genre. On the other hand, these sequences might seem rather boring to some viewers, which of course the rest of the film suffers from.

So it is then important to get involved in the fact that The Grey is just much more than a pure survival thriller. Rather, the film is a character study of a man who has lost all will to live and seems to find it again in the face of impending death. Liam Neeson embodies this man incredibly powerfully. When he is haunted by memories of his wife, which is visually very movingly staged alone, there is so much sorrow and grief reflected in Neeson's gaze that you almost want to think that the actor is not acting here, but processing the death of his wife Natasha Richardson, who died in a skiing accident in 2009. But it's not just in these emotional moments that Neeson makes a strong presence. The actor also gives his all in the magnificently staged action sequences, which make these sequences really intense despite the wolves that look too artificial.

The Grey was shot in icy Canada and the cold that the actors were exposed to is almost palpable for the viewer as well. Whether they have to trudge through deep snow, climb over gorges or flee from their pursuers in icy rivers, the struggle for survival of the steadily diminishing group is extremely gripping and excitingly staged, even if the limits of logic are crossed many a time.

Personally, I enjoyed the film very much not despite, but precisely because of the quieter character moments. I also found the ending, which is sure to divide minds, to be very intense and well done. The only problem is that the trailer promises the audience non-stop action and therefore many will go to the cinema with the wrong expectations. If you can detach yourself from these expectations and get involved with the mixture of adventure film, action thriller and drama, you might be as gripped by the film as I was. And then, even if the whole thing is not always particularly realistic and there are also in terms of special effects some small weaknesses, then the bottom line is also: absolutely worth seeing!!