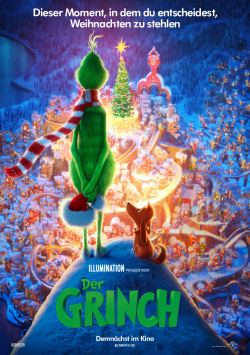 It's getting festive again in Whoville. Christmas is just around the corner, and once again this year the entire town will be festively lit and lavishly decorated. Everyone likes that - except one person: The Grinch (voiced by Otto Waalkes) hates Christmas! The cheerfulness of the inhabitants of Whoville is pure horror for him and Christmas carols only cause him a violent gag reflex. There would be only one thing that would make him happy now: If he could succeed in ruining Christmas for the merry folk of Whoville. And so the Grinch devises a nasty plan to make sure that this year's festivities are cancelled. However, he hasn't counted on little girl Cindy-Lou in the process.

The Grinch is a true Christmas classic, especially in the USA. Not only the book by Dr. Seuss, but especially the animated film from the 1960s. The live-action adaptation by Ron Howard with Jim Carrey as the Grinch was a respectable success, but never managed to achieve the cult status that the timelessly beautiful animated film did. Now the makers of Minions and box office successes like Sing and Pets have taken on the material. The story has been blown up a bit in the process, but otherwise - except for one aspect - not really changed.

And that brings us to the film's real problem. It doesn't really offer anything of its own. What is new is not only visually reminiscent of other films from Illumination. The studio copies itself over and over again, which makes their films extremely successful, but unfortunately very unimaginative in the long run. There are two really good gags, but they were already handled in the trailer. The rest is rather pleasing, harmless fun, which, however, adds little new to the classic.

Sadly, the only real change is of rather negative origin. The moral of the actual story is that there doesn't need to be a flood of presents for a merry, happy Christmas. That's been left out here - perhaps in part to get as much Grinch merchandise under the trees as possible. The Grinch's backstory is quite nice, but also isn't fleshed out well enough to be convincing.

No question, kids will love this movie. Still, it's a shame that charm and originality are almost completely absent here. And then there's Otto Waalkes. Again, he's just Otto - his typical laugh and holadrio included. His voice, however, seems far too nice to fit the Grinch. The condescending arrogance with which Benedict Cumberbatch convinces in the original English is not to be heard here in any second. Yes, I know Otto always pulls punches as a voice actor. But here he's actually completely miscast for the story.

The Grinch will still flush millions into the box office. And since I don't want to be a Grinch and don't want to spoil the children's pre-Christmas visit to the cinema, there is still a: Worth seeing!