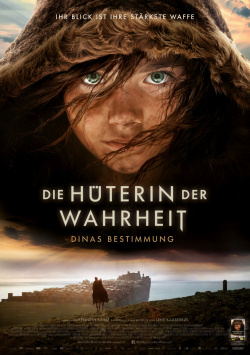 The Guardian of Truth - Dina's Destiny

The girl Dina (Rebecca Emilie Sattrup) has a heavy heritage to bear: like her mother Melussina (Maria Bonnevie), she too is a shamer. Looking deep into a person's eyes, she can see their sins and weaknesses. In her village, the girl is therefore shunned by the other children. But this ability has not yet put her in real danger. This changes when Prince Nicodemus (Jakob Oftebro), the heir to the throne of the kingdom of Dunark, is accused of murdering the ruling family. After Melussina attests to his innocence, it becomes clear that the Shameful Ones could pose a real threat to the real killer. Under the guise of helping her mother, Dina is also brought to Castle Dunark and finds herself in the middle of a murderous intrigue that she too may soon fall victim to.

In adapting the popular young adult fantasy novel The Guardian of Truth - Dina's Destiny by Lene Kaaber&oslash;l, the creators have spared no expense or effort in making it the launching pad for an internationally successful cinema franchise. The adventure is one of the most expensive Danish film productions of all time, with over 4500 girls auditioning for the lead role before Rebecca Emilie Sattrup was cast as Dina. Director Kenneth Kainz wanted to immerse his primarily young audience in a magical world that would do to them something like what he felt as a child watching Star Wars. These are lofty goals that the film unfortunately fails to achieve.

You can definitely tell from the production that the creators had some passion at work here. That they tried to create a world that is dark and threatening, but that children can still happily escape into. With a strong heroine, (not really) scary dragons and lots of suspense, the movie has a lot of potential too. But unfortunately it is somehow staged past any target audience. For small children it is simply too dark and too brutal. There are especially two scenes that are absolutely not suitable for viewers under 12 years. On the other hand, it's not cool enough for this age group. It seems a bit too stale and childish for teenage fantasy fans to warm up to. And beyond the age of 16 nobody will be interested in this story anymore.

In addition, the script has some really awful dialogues, which are delivered by the good actors in a wooden way. They never manage to blend in with their surroundings, so it always feels like a performance of the Bad Segeberg shaming festival rather than a great feature film. As much as the makers may have tried to bring something magical and big to the screen here, it doesn't come across that way in the end. Nevertheless, there will surely be some young viewers who will be carried away by the really exciting story and thus can overlook the many weaknesses. And for these young fantasy fans this adventure around the young Shameer is then also quite: Worth seeing!

Cinema trailer for the movie "The Guardian of Truth - Dina's Destiny (Dänemark 2015)"
Loading the player ...