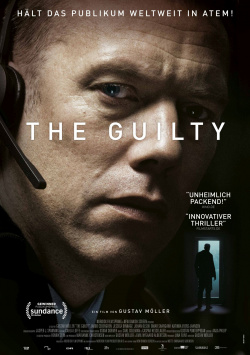 Asger Holm (Jakob Cedergren) is rather listlessly completing the telephone service at the police emergency call centre. But then he receives a call that immediately rings all the alarm bells. In a trembling voice Iben begs for help. She has been kidnapped and as her tormentor listens in, she pretends to be talking to her daughter, who is waiting alone and frightened at home for her mother. With far too little information and tied to the phone, Asger gives everything to help Iben. But even though the police are on a desperate search, there is no trace of the car in which the woman and her kidnapper are sitting, and the time for a rescue is getting shorter…

"The Guilty" tells a very similar story to the Halle Berry thriller "The Call - Leg nicht auf! The Danish chamber play is very minimalistic up to the last minute, while Halle Berry was able to plunge into a rather lurid final at the time. And on the other hand, Gustav Möller's celebrated directing debut has a real twist, which in the end makes the intensity of the action increase enormously.

Despite its 85 minutes the kidnapping drama has to struggle with some tough moments - especially when Asger sits paralyzed in front of the phone and you want to shake him as a spectator that he finally takes off, because time for Iben is getting scarcer and scarcer. This should illustrate the inner struggle of the policeman, who is facing a decisive trial a few hours later. That's all well and good, but this aspect of the story is a bit too exhausted, which leads to some small lengths.

Nevertheless, "The Guilty" is all in all an extremely exciting, stirring and also surprising thriller, which proves that you can captivate the audience even with very simple means. Despite some small weaknesses there is a clear one: Absolutely worth seeing!

Cinema trailer for the movie "The Guilty (Dänemark 2018)"
Loading the player ...