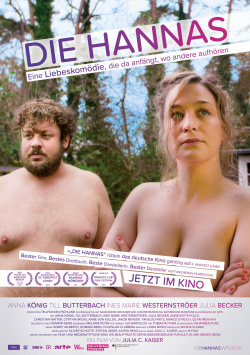 Hans (Till Butterbach) and Anna (Anna König) are The Hannas: an intrinsically happy couple in their thirties. They have been together for fifteen years, enjoying the routine and their shared passion for cooking. The two are content with this life without any big surprises. At least that's what they think. But that changes when they meet sisters Nico (Ines Marie Westernströer) and Kim (Julia Becker). Both begin an affair - Hans with Kim and Anna with Nico - without knowing about the other's cheating. The affairs unleash hidden longings and repressed passion, shaking the Hannas' emotional fabric to its foundations. But even for Nico and Kim, the encounter with the Hannas is not without consequences and stirs up an old trauma.

With her second feature film The Hannas, director Julia C. Kaiser has staged an extremely unusual relationship story. She shows what can happen when routine blinds and longings are suppressed by talked-in contentment. Her protagonists are unaware that they are missing something until they are confronted with it in an unexpected and very drastic way. What this means for their individual and common future is sketched out by Kaiser in a very unconventional way. This applies to the dramaturgical aspect of the film as well as to the camerawork or the acting of the actors, which seems improvised for long stretches.

No question: for those who are primarily used to German mainstream cinema, a film like Die Hannas could be quite an exhausting experience. You have to be able to engage with the unconventional staging in order to feel the power of aspects such as the sometimes very drastic contrast of comedic and very darkly dramatic elements. Those who succeed in doing so will be treated to a truly surprising deconstruction of a long-term relationship.

Julia C. Kaiser has made a film that raises interesting questions, such as to what extent compromise is good for or detrimental to a relationship and whether individual happiness can be found as a couple or only alone. If you appreciate young German cinema with fresh actors and like to move outside the beaten mainstream, this film can be recommended to you. Worth seeing

Cinema trailer for the movie "The Hannas (Deutschland 2016)"
Loading the player ...