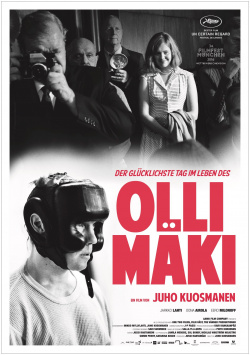 The happiest day in the life of Olli Mäki

1962: All Finland is upside down. Because Olli Mäki (Jarkko Lahti) could be the first Finn to become world boxing champion at featherweight. In Helsinki his trainer Elis (Eero Milonoff) wants to prepare him for the title fight. Training, press conferences, promotional shoots and whatever else is necessary to capitalize on the possible title are on the tight schedule. But so close to his goal, Olli's head and heart are not in the right place. Because with Rajia (Oona Airola) he has just found the love of his life. And he doesn't want to let her go so easily anymore - not even for a world championship title.

With his feature debut The Happiest Day in the Life of Olli Mäki, director Juho Kuosmanen has adapted a very well-known true story in Finland for the screen. Shot on 16mm material in black and white, his work can virtually be described as anti-rocky. As great as the parallels between the two films may be in dramatic terms, the way in which they are told is completely different. Kuosmanen has opted for a very restrained, quiet narrative style, adding a little melancholy to the laconic humour that is not uncommon in Finnish cinema. What emerges may seem a bit plodding and too leisurely. But if you can get into the particular narrative style, you will also succeed in discovering and enjoying the beauty of the images and the story.

With much effort, the filmmaker has scooped up old footage to give his debut as authentic a look as possible. In the age of digital cinema, where people are always boasting about the latest technology and the best picture quality, this is an unusual and also courageous undertaking. Because this way, the film eludes the usual viewing habits, which is intensified by the unagitated narration. You get the feeling that The Happiest Day in the Life of Olli Mäki was made in the late 60s rather than in 2016. As such, Juho Kuosmanen has absolutely achieved his goal, even if it makes it difficult for the film to appeal to a wider audience.

But program cinema lovers will get their money's worth here. With a subtle wink, the film tells the story of a boxer who is told to sell his soul at the drop of a hat with the prospect of a big win, but who would rather give his heart away to the love of his life. This could have easily become big kitsch with a lot of pathos. But there is nothing of that here. The production remains subtle in all moments and just because of that it seems charming and true to life. This is not a film for viewers who need speed and action. But if you like fine arthouse fare with quiet humor and subtle melancholy, this is the film for you. Worth seeing

Cinema trailer for the movie "The happiest day in the life of Olli Mäki (Finnland/Schweden 2016)"
Loading the player ...