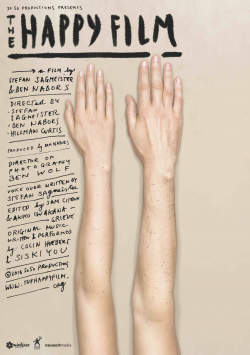 What is happiness? Can we influence our own personal happiness? For example, through therapy, through medication or through love? In 2009, Austrian designer Stefan Sagmeister began to intensively explore these questions. The whole thing was supposed to be a self-experiment recorded on film and designed to last 18 months. In the end, however, the project took seven years. Years in which Sagmeister was able to experience a great deal of personal happiness, but was also confronted with failed relationships and the death of a friend, his co-director Ben Nabros. These are turbulent years that produce not only an acclaimed exhibition, but also a stirring, moving and extremely entertaining documentary.

The Happy Film is actually coming to theaters a few months too late. Accompanying the exhibition The Happy Show, which thrilled visitors at Frankfurt's Museum Angewandte Kunst until the summer of 2016, the documentary would have been perfect, revealing the origins and background of some of the pieces in this very special exhibition. But even a few months later, the film is still very much worth watching. For one thing, it is a really compelling portrait of the artist, revealing to the viewer some very intimate insights into the life and work of Stefan Sagmeister.

The documentary works particularly well because Sagmeister doesn't even try to find a universal answer to the questions of ultimate happiness, but focuses on his very own, very personal sense of happiness. In doing so, he reveals not only a fair amount of self-criticism, but also plenty of self-irony. And that's what makes The Happy Film so enormously entertaining. The documentary is sometimes playful, then again very profound, sometimes extremely humorous and then again very moving on an emotional level. It is a film that shows how individual the perception of happiness is and that we ourselves are responsible for how happy we are.

Those who have watched The Happy Show and want to learn more about how it came to be should not miss this film, nor should those viewers who appreciate documentaries that not only make you happy and think, but are also extremely entertaining. Absolutely worth seeing!

The film is running in the OmU version in German cinemas