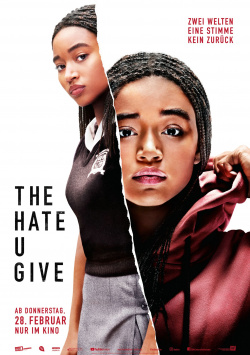 The Hate U Give

Maverick (Russell Hornsby), a former gang member, wants to prevent his children from slipping into crime at all costs. So he sends 16-year-old Starr (Amandla Stenberg) and her siblings to a private school far from the working-class neighborhood where they live. They are two completely different worlds that Starr has to move back and forth between day after day. While at home she must try not to look too white, at school she must shake off any suspicion of ghetto. It's a delicate balance that threatens to tip when Starr is the only witness to her childhood best friend being shot by a police officer. Now Starr must decide: Should she keep doing what she's been doing, or should she turn her life completely upside down by flying the flag and standing up for her dead friend.

The young adult novel The Hate U Give by Angie Thomas has been able to win over its target audience, and not just in America, even if the story seems very American at first glance. But on closer examination, it deals with problems that are unfortunately part of everyday life for many young people in other parts of the world. Racism is of course the main topic, but by far not the only one that is addressed in the novel and its successful adaptation. Especially in the film this is sometimes presented a bit too boldly and especially towards the end it wears too thick. But that does little to change the fact that the message of the story is red-hot and enormously important, and not just for young people.

The film is a plea to stand up against injustice, to raise your voice, even if you have to step out of your comfort zone to do so. Starr knows what that will mean for her. She has to decide if she's going to continue living two lives, or stand up for what she believes in deep in her heart. Not only to hold up the reputation of a boy who meant a lot to her, but also that his death, which in itself was completely gratuitous, wasn't completely pointless. Sure: At times this seems a bit contrived and the characters are drawn in a somewhat clichéd way. But on the other hand, there is also a very obvious attempt to push the boundaries of the usual black and white painting, which adds some really interesting facets to the story.

Lead actress Amandla Stenberg delivers a really strong performance, which is further supported by good performances from the rest of the ensemble. The production by George Tillman Jr. (No Place Without You) has a few minor lags, but overall is engaging and adequately brings the essence of the novel to the screen. All in all, that's enough to give the film a clear "worth seeing" rating, especially but not only for the teenage target audience.