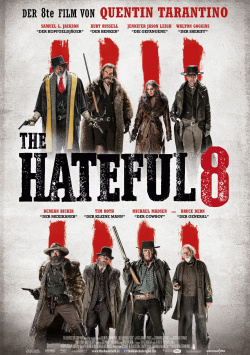 Film: After the great success of "Django Unchained" Quentin Tarantino has remained true to the western genre in his eighth feature film. But even if there might be some smaller parallels, the movies couldn't be more different. Because "The Hateful Eight" is first and foremost a chamber play carried by his dialogues and his great ensemble, which plays almost exclusively in a carriage and then in a small goods store. Only occasionally is the action carried out, where the images of the snowy Colorado (which served as a "double" for Wyoming) provide moments of breathtaking beauty.

The story of the almost three-hour film is very simple: Bounty hunter John "The Hangman" Ruth (Kurt Russell) wants to bring prisoner Daisy Domergue (Jennifer Jason Leigh) to the city of Red Rock. On the way, Ruth picks up a threatening snowstorm in the neck from Major Marquis Warren (Samuel L. Jackson) and the southern deserter Chris Mannix (Walton Goggins), who pretends to be the new Sheriff of Red Rock. Together, they make it to Minnie's hardware store before the snowstorm catches up with them. Here they must now wait with the Mexican Bon (Demian Bichir), the cowboy Joe Gage (Michael Madsen), the Confederate General Sandford Smithers (Bruce Dern) and the hangman Oswaldo Mobray (Tim Roth) until the storm has passed. But in the supposed protection of the small shop it becomes more and more obvious that the eight strangers didn't meet here quite by chance - and that some of them are waiting for certain death in here…

"The Hateful Eight" is a typical Tarantino especially in the last act. When the whole thing culminates in a wonderfully exaggerated bloodbath after just under two hours of almost exclusively talking, the master truly reaches top form. But also in the two hours before that the movie has a very high entertainment value. Despite the rather chamber play-like staging, the work never seems like a filmed play. Tarantino proves to be a real knack for visually bringing out great cinema quality even in very cramped rooms. And even if the dialogues do not belong to the best he has written so far, they are still full of wit and mystery, as one is used to expect from him. And when they are performed as wonderfully as by this excellent ensemble, then it's a lot of fun.

Of course you can reproach Tarantino again, as so often here, that he actually only stole set pieces from other movies. When a murder happens in the midst of a group of (supposedly) strangers, it is very reminiscent of Agatha Christie's thrillers. And very freely interpreted, there are even parallels to another film with Kurt Russell, in which he - completely snowed in - had to find out which of the people around him was lying and posing a deadly danger. Of course we are talking about the horror classic "The Thing from Another World", from which Tarantino at least seems to have copied the claustrophobic atmosphere. There are numerous other aspects of the film in which one could recognize obvious sources of inspiration. Yet, as in his earlier movies, Tarantino can't be accused of simply delivering a cheap plagiarism and stealing his story. Rather, you can see every second how much Quentin Tarantino loves cinema and how perfectly he knows how to pay tribute to all his great role models.

This becomes clear by the fact that he managed to get old master Ennio Morricone to compose a new film score for him. But also the pictures shot in 70mm format on real film are an impressive and also wonderful testimony for Tarantino's love for the cinema. Visually, "The Hateful Eight" is truly a masterpiece. Dramaturgically, however, it is not the best of Tarantino's eight directorial works to date. However, even with some lengths and a certain amount of recognizability of the story (at least until the last act) the movie is still a great entertainment movie. And for that there is also - with small deductions in the B mark - the best rating: Absolutely worth seeing!

Picture + sound: "The Hateful Eight" is made for the big screen. But also in the home cinema the film can inspire on the Blu-ray with its great pictures. This is ensured by a high image sharpness, an atmospheric colouring and a pleasant image depth. The sound is determined over long distances by the dialogues, but even in the quieter moments the DTS-HD 5.1 MA Mix ensures a proper utilization of the surround channels. Very good.

Extras: Unfortunately there are only two extras on Blu-ray: A look behind the scenes (about 4:58 min.) and a featurette about the magic of 70mm (about 7:32 min.). That's really very weak for such a blockbuster.

Fazit: "The Hateful Eight" may not be Quentin Tarantino's best film, but it is definitely another entertaining testimony to his love of cinema and his talent for great dialogue. The Blu-ray convinces with a very good picture and sound quality, only the 13 minutes long bonus material disappoints the disc. But only for the main movie there is a clear one: Recommended!