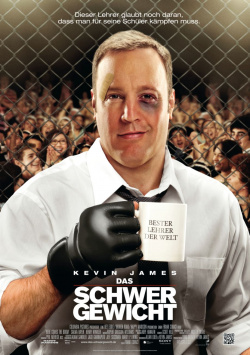 It may be that Kevin James is not the best actor comedic cinema currently has to offer. But there's no question that the King of Queens star has tremendous likeability value, making him one of Hollywood's most beloved comedians. And so it's little wonder that his films, even when they may not be of particularly high quality, consistently make their way to the top of the box office charts. And even if this way with his latest work The Heavyweight might be a little more difficult, here again a decent success can be assumed.

In the comedy from zookeeper-director Frank Coraci James plays the biology teacher Scott Voss, who spends his time almost even less happy in the classroom than his students. Over the years, Scott has lost any form of enthusiasm, which of course doesn't send a particularly positive message to his students. But that all changes when the principal (Greg Germann) wants to drastically cut the school budget and, of all things, eliminate Marty Streb's (Henry Winkler) music program, which is so popular with many students. Actually only to impress the school nurse Bella (Salma Hayek), Scott calls to save the program. But the money needed to do so is not so easy to organize. When even the last hope seems to be dashed, Scott recalls his talents as a wrestler in college. With these rusty skills, the teacher wants to try his hand as a mixed martial arts fighter. What initially ends in painful humiliation soon develops into a serious glimmer of hope. But then fate throws another big stone in Scott's path that seems to have sealed the end of the music program.

Heavyweight starts off, if you'll forgive this clumsy pun, arguably heavy-handed. The gags are rather flat and at best provide a tired smile. Also the dramaturgy, which anyway doesn't come across as particularly original and extremely lacking in surprises, starts off very sluggishly. But as soon as Scott makes his first attempts as a mixed-martial-arts fighter, the entertainment value of the comedy goes way up. It may be that the message that you literally have to fight your way through when the state doesn't help anymore isn't exactly subtle and clichéd. But the many successful gags, especially in the second half of the film, and the charming characters prevent the film from being completely crushed by its lack of content.

Kevin James, who also co-wrote the screenplay, tries to make his character seem a little cooler than the characters he's played lately. He succeeds very well at this in itself, but since he's dialed back the usual loser charm considerably, the nicely-drawn supporting characters are able to benefit significantly from this, even downright upstaging James at times. Whether it's Henry Winkler as a lovable but somewhat dorky music teacher, Salma Hayek as a pretty school nurse who shows on her first date that she can also punch powerfully, or finally Bas Rutten, a real MMA trainer in his own right and a good friend of Kevin James, who provides some really good laughs as Scott's trainer Niko, they all almost more than James himself make sure that The Heavyweight ended up being a lot funnier than it first appeared.

Not quite as family-friendly as The Zookeeper, not quite as silly as The Department Store Cop or Child's Head, but still a typical Kevin James film. So fans of the comedian can go to the mat with the heavyweight without worry. However, if you're expecting more than an amusing jock romp, you're more likely to be disappointed by the hard-hitting educator.

Cinema trailer for the movie "The Heavyweight (USA 2012)"
Loading the player ...