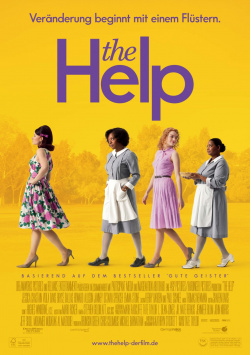 There are always films that demonstrate in a very gratifying way that success simply cannot be planned. Tate Taylor's adaptation of the novel Good Spirits by Kathryn Stockett is one such film. Because even though the studio didn't really believe it would be a big success, The Help turned into a real blockbuster in the US, which not only managed to bring in over 140 million dollars, but is also considered a sure candidate for the next Academy Awards.

Told the story of young Skeeter (Emma Stone), who returns to her native Jackson, Mississippi in the early 1960s with a very big dream in tow. Skeeter is desperate to become a successful writer and is desperate to find the right material for her first work. When she sees how her former best friends, especially the arrogant Hilly Holbroook (Bryce Dalla Howard), treat the African-American maid, Skeeter's sense of justice drives the young woman to a bold and risky decision: she wants to interview the very women who take care of the children of the white upper class every day, but are treated by them like dirt. The fact that Skeeter's plan is not only against etiquette, but also against the law, makes it dangerous for the women who agree to tell Skeeter their stories. But when kind-hearted Aibileen (Viola Davis) and resolute Minny (Octavia Spencer) side with Skeeter, the project gets rolling - and takes on proportions Skeeter could never have imagined in her wildest dreams.

The Help is the epitome of a feel-good movie. A politically correct and humanly overly mindful message is blended here with plenty of humor, emotion and some drama to create a whole worth watching. The fact that the characters are drawn a bit one-dimensional and the good-human and despicable qualities are distributed a bit too one-sided, doesn't really bother much. The film has its heart in the right place and this is so intensely palpable that one is only too happy to forgive its numerous clichés.

Tate Taylor has approached the film adaptation of the New York Times bestseller with a great deal of dedication. No surprise really, given his close friendship with author Kathryn Stockett since childhood. With a lot of respect for the characters Stockett brought to life in her book, Taylor tackles a topic that is still quite provocative in the U.S. and serves it up with a pleasant lightness. While quite a few moments just make you angry, Taylor skillfully prevents the story from being too overwhelmed by the weight of the real-life background. The film wants to entertain first and foremost and along the way still convey an important message about friendship and moral courage. And despite a certain superficiality, it succeeds very well.

This is also due to the cast. Emma Stone (Easy to Have) once again proves to be one of the most talented and charming young stars Hollywood currently has to offer. Stone has a refreshing naturalness and an infectious cheerfulness, from which this film can also benefit despite many dramatic moments. But Bryce Dallas Howard is also excellent as the epitome of the dirty white woman who quickly draws the audience's hatred with her arrogance and callousness. Howard plays this thankless role with bravado.

But arguably the biggest impression is left by Octavia Spencer as the resolute Minny, who provides both the film's most wonderful laughs and some of its most touching moments. But whether it's humorous or dramatic, Spencer is simply terrific in every moment. Her performances alone justify buying a movie ticket.

Despite the rather considerable length of 146 minutes, despite some clichés and the somewhat thick finale, The Help is simply a very beautiful film that makes the viewer laugh, but at the same time is also moving and thought-provoking. Especially in times when racism is again increasingly in the focus of attention and has unfortunately become a bigger issue in our society again, this yet very entertaining handling of the inherently heavy subject matter is important, but still enjoyable, entertaining and simply: absolutely worth seeing!